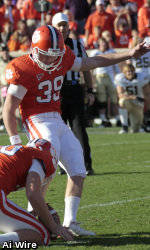 CLEMSON, SC – Since Wake Forest was doing everything they could to freeze his sophomore placekicker, Clemson Head Coach Dabo Swinney wanted to let Chandler Catanzaro know that everything was going to be just fine.

“I’m trying to think of anything I can think of to say to him. I said, “Cat, look. We are going to win this thing in overtime if you miss this kick,'” Swinney said. “‘I’m still going to love you whether you make it or miss it, but you do have permission to go ahead and knock this thing through right now.'”

And that is what Catanzaro did, as the he nailed a 43-yard field goal as time expired to lift Clemson to a 31-28 come-from-behind victory over Wake Forest and into the ACC Championship game on Dec. 3 in Charlotte. NC.

Swinney always ends his Thursday night practices by asking his players to go home and visualize what they are going to do in Saturday’s game. He always tells them to visualize making the game-winning catch, making that block that will spring the running back for a long run or visualize throwing the winning touchdown pass.

For Catanzaro, he visualizes making winning field goals, and this week he took his coach’s speech to heart even more than before.

“That’s a big part of my game,” he said. “I did it all week. I do it for every game. I visualize a game-winner. I did it this week and through those timeouts, I took a couple of deep breaths and took a couple of dry swings.

“When it comes down to it, it is just a kick. I knew I was going to give it my best shot and I did. I had great contact; followed through, kept my eyes back and it went straight through.”

It was solid redemption from just moments before when he missed from 30 yards that would have given Clemson the lead with 1:18 to play. But, the defense held Wake Forest on its next possession and got the ball back to its offense.

The Tigers had to cover 41 yards in the last 52 seconds to win the game, and their quarterback had no doubt that it was going to happen.

“I knew if they gave us the ball back, we were going to win,” quarterback Tajh Boyd said.

Boyd did his part by completing passes of 16 and 17 yards to tight end Dwayne Allen before completing an 8-yard pass to freshman Adam Humphries with seven seconds to play.

With the ball at the 26-yard line, Swinney called a timeout and asked Catanzaro what he wanted to do.

“We had a play we could run where we could slam it up the middle and then call timeout to put the ball in the middle of the field,” Swinney said. “So I asked Cat if that is what he wanted to do, and he said, `No. I want to kick it right there.'”

Swinney obliged his kicker’s wishes and then in one kick, the sophomore made up for the previous miss and atoned for the miss at Auburn last season as well.

“I used last season and that game as adversity,” he said. “I learned from it. I rose above it. I knew if I could get the next opportunity, I would nail the next one. I got it, and I nailed it.”

And then he went and celebrated with his teammates and 80,000 of his and Clemson closest fans.