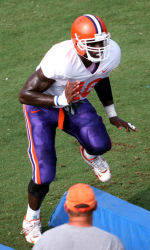 Clemson, SC-Clemson began its specific preparation for the opening game with Florida Atlantic on Thursday afternoon. The Tigers practiced for nearly three hours on the practice fields behind the Jervey Athletic Center.

“It was a long hard practice,” said Head Coach Tommy Bowden, who will open his eighth season as Clemson head coach on September 2. “We started installing the game play for Florida Atlantic today.”

“They like to use a lot of two-back on offense and they will be multiple on defense. When I was a graduate assistant at Florida State and he was the head coach at Miami (FL) he was certainly a coach that you watched with interest. He always had fundamental teams that out executed teams.”

Schnellenberger coached the Hurricanes to the National Championship in 1983 and had a 41-16 record at Miami (FL) in five years.

“Jacoby has a good feel for the game. He is a mature player for a freshman who is better than I thought. He has better hands than I thought. You never know about those track guys. He has good vision, and is outstanding in the return game. Coming here in January was a big plus for him.”

Bowden said after practice that junior wide receiver Nelson Faerber of Duluth, GA had been put on scholarship. Faerber is in his third year with the team. Bowden also said that Adrian Kindred a reserve linebacker from Opelika, AL had decided to transfer to another school.

Three players were at practice in a yellow jersey. Jamarcus Grant (broken foot), Andrew Diomande (knee) and Barry Humphries (ankle) all missed the practice. Grant will miss the first game, as will starting linebacker Tramaine Billie (broken foot). Diomande and Humphries will be back next week.