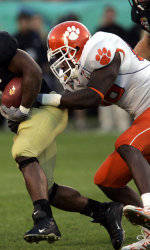 Clemson, SC- Clemson starting linebacker Tramaine Billie suffered a broken ankle at the end of the second practice on Wednesday. The injury took place during a drill on the last play of the day. The severity of the injury was revealed after doctor’s exams on Thursday.

Billie, a senior from Eastover, SC, will have surgery on Friday at Oconee Hospital in Seneca, SC. Clemson team orthopedic surgeon, Dr. Larry Bowman, will perform the surgery. More will be known concerning the length of Billie’s absence from the lineup after the surgery on Friday. He will be lost for at least the first game.

“We will just have to see what the doctors say after the surgery,” said Head Coach Tommy Bowden. “Tramaine was doing well competing with Antonio Clay for the starting position. Now Clay will have to be the guy, at least in the short term.”

Billie has played in 32 games for Clemson, 18 as a starter, all consecutively. Clemson has a 13-5 record in those 18 games. Last year he tallied 93 tackles to rank third best on the team. He finished the regular season with a Clemson team best 12 tackles in the win at #19 South Carolina. He had a career high 13 tackles in the overtime loss to Boston College. Billie had 62 tackles as a sophomore in 2004 when he started the last six games of the season. He played in nine games as a true freshman in 2003. Billie has never red-shirted so he could sit out the year and return in 2007.

Clay played in all 12 games last year and started once. He had 27 tackles as a first-year freshman, including nine tackles in the win over Temple when he made his only start of the year. That total led Clemson that day. Bowden said that veteran reserve Maurice Nelson could see enhanced playing time in light of Billie’s injury. Nelson has experience at various linebacker positions in the Clemson defensive scheme.

The Tigers had one three-hour morning practice on Thursday. Clemson will hold two practices on Friday, then have a scrimmage at Death Valley on Saturday. The offense had the upper hand in a goal line scrimmage at the end of practice. Given a first-and-goal from the nine on each set, the offense scored four touchdowns in six attempts.

Earlier in the workout Palmer also caught a 30-yard touchdown in a scrimmage situation from Proctor.

“Michael Palmer had a good day of practice,” said Bowden. “He is making strides as a blocker and in terms of catching the football.”