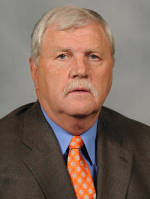 Brooks is a veteran of 34 years in coaching, including 27 at the college ranks, 26 at the Football Bowl Championship level. In those 26 years at the FBC level he has coached 17 bowl games and been a part of 17 seasons that have finished in the top 25 of at least one poll. That includes the 1998 season when he was the defensive line coach on the Tennessee staff that posted a perfect 13-0 record, including six wins over Top 25 teams, and won the National Championship.

“Dan Brooks is one of the top defensive line coaches in the nation and we are thrilled that he has joined our staff,” said Clemson Head Coach Dabo Swinney. “He came highly recommended from coaches and administrators who are with us now. He is one of the big reasons the University of Tennessee has been among the top defenses in the nation for many years. Many of his players have gone on to outstanding professional careers and he has been considered one of the top recruiters in the country.

“With Dan’s addition, we now have four assistant coaches who have been part of staffs that have won the National Championship. I am very pleased with the way our staff has come together.”

In addition to serving as defensive line coach at Tennessee from 1994-08, Brooks was the recruiting coordinator for the program from 1999-2002.

Between 1988-93, Brooks was the defensive line coach at the University of North Carolina under Mack Brown. The Tar Heel program made a significant improvement in that time, as it reached the final top 20 in both 1992 and 1993. The 1993 team won 10 regular season games and played Alabama in the Gator Bowl. A number-seven national ranking in rushing defense had a lot to do with that success.

From 1983-87, Brooks was a defensive line coach at the University of Florida. He was a graduate assistant in 1983 and became a full time coach in 1984. The Gators had three top 10 finishes in at least one poll during that time period, including the 1984 season when the squad was 9-1-1 and finished third in the final AP poll.

Between 1976-82, Brooks was a high school coach in Kings Mountain, NC. Among the players he coached was former Clemson All-ACC running back Kevin Mack, who went on to a Pro Bowl career with the Cleveland Browns.

Born June 25, 1951, Brooks and his wife Kathy have two children, Tara and Rhett.