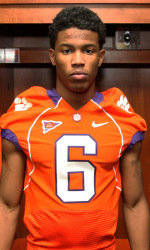 CLEMSON, SC – Clemson football signee Martin Jenkins (Roswell, GA) won the 100m dash and was runner-up in the 200m dash on May 15 at the Georgia state track & field meet. The Centennial High School product produced a personal best 10.59 in winning the 100m AAAAA final, while posting a time of 21.43 in the 200m dash as well.

Jenkins was one of 23 prospects to sign a letter of intent with the Tiger football program in February. The 5-foot-9, 170-pound Jenkins was rated as high as the nation’s No. 38 cornerback prospect by ESPN.com. He accounted for 12 touchdowns, five different ways, as a high school senior. He had three rushing touchdowns, three receiving, three on interception returns, two on punt returns, and one on a kickoff return.

His improvement on the track was evident as a senior. As a junior in 2009, he finished fourth at the Georgia AAAAA meet in both the 100 and 200. He also shaved two tenths of a second off his personal best in the 200m dash.