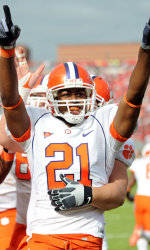 Ralph Waldo Emerson once said, “Our greatest glory is not in never failing, but in rising up every time we fail.” Senior wide receiver Xavier Dye is a testament to this quote.

Throughout his high school and collegiate career, Dye has faced many obstacles that have tempted him to give up the one sport he loves the most, football.

Dye began playing football in the seventh grade with motivation from his middle school coach. His coach encouraged him to come out for the team, but he also stressed that he would have to earn a spot. His middle school coach told him that he would not simply be put on the team, but he would have to work just as hard as the others and prove himself if he wanted to make the squad. This type of challenge was the motivation Dye needed to embark on his football career.

While Dye began his career as a defensive end and tight end, he quickly transitioned to wide receiver during his freshman season in high school. As a wide receiver at Greenwood (SC) High School, he began to receive a lot of notoriety and attention. Dye had a breakout junior year, finishing the season with 37 receptions for 614 yards and four touchdowns. That is an average of nearly 17 yards per catch.

Following his junior year, Dye decided to transfer to James F. Byrnes High School for his senior season. There, he played alongside fellow Tiger Stanley Hunter and Willy Korn. Dye’s decision to transfer high schools for his senior season was a tough one to make, but he and his family believed the change was necessary to further his development as a wideout.

Due to state high school league eligibility issues surrounding his transfer, Dye was not able to start until late in his senior season. Overcoming adversity, he finished with an impressive 32 catches for 524 yards and six touchdowns in only four games.

“I enjoyed every moment at Greenwood and Byrnes,” recalled Dye. “I have no regrets about my decision to transfer. It benefited me not only on the field, but in my every day life, allowing me to meet awesome people I can call friends for life.”

While Dye faced the challenge of switching high schools his senior year and adjusting to different styles of play, he stayed positive and never backed down from the challenges thrown his way. However, his high school transition could not compare to the obstacles that faced him upon entering college.

Rivals.com rated Dye as the #13 prospect in South Carolina, while SuperPrep rated him as the #14 player in the state. Along with these accolades came multiple scholarship offers. Among the offers in front of him were Clemson, Georgia, North Carolina, and N.C. State.

“I chose Clemson because it was close to home and my family could easily attend all the games,” stated Dye. “I also liked the way the players treated one another. It was like a family and I enjoyed the town. It is a unique place. There is nothing like running down the Hill and rubbing the Rock in front of thousands of fans.”

Dye entered Clemson in January of 2007 and participated in spring practice. During the spring, he quickly saw the many differences between high school and college.

“The biggest transition I had was the speed of the game and the heightened level of knowledge that I had to learn from a football standpoint.”

While at Clemson, Dye has lettered all three years, playing as a true freshman in 2007. That year, he played 156 snaps, second-most by a freshman offensive player. He had four receptions for 50 yards and scored a touchdown against Central Michigan by recovering a fumble in the endzone. Dye also showed his ability as a great blocker, totaling 11.5 knockdown blocks.

Dye began to establish his place on the team as a sophomore and junior. In 2008, he moved to second-team wideout and started two games (N.C. State, Maryland). During the S.C. State game, Dye played a season-high 30 snaps with three catches for 37 yards.

The 2009 season presented Dye with a challenge when he began the season as a starter, but then was moved to second team after the Middle Tennessee game. He noticed his playing time was slowly diminishing and asked Head Coach Dabo Swinney for a release to transfer. Although Dye believed the transfer was needed, Swinney thought otherwise. After a long talk between the two, Dye decided to rejoin the team.

“It was a phase I was going through,” admitted #21. “I had to man-up to the task at hand and do my job. I also had put too much work into the program and wasn’t going to leave my teammates.”

Swinney and the team welcomed Dye back and he returned to the team as a force to be reckoned with. He finished the season fourth on the team with 14 receptions for 236 yards and averaged 17 yards per catch. He was the second-leading receiver among wideouts on the 2009 team. Dye also had a career-high yardage in Clemson’s win over Florida State with three catches for 68 yards and a score. His best football memory comes from that game.

“I remember it the most because I played a huge role, catching a touchdown pass and coming inches away from scoring again.”

Dye’s touchdown catch against Florida State came on a pass from Kyle Parker. He also caught scoring passes from C.J. Spiller and Jacoby Ford over the course of the season and became the first Tiger in history to catch a touchdown pass from three different players in one year.

Dye’s determination to get better and work harder resulted in him earning a starting position for the last nine games of 2009. He is now currently the leading returning receiver on the 2010 team with 21 career receptions.

Dye has shown his skill on and off the field. By participating in several community services projects, he earned the honor of being named to the 2009 Allstate AFCA Good Works Team. He was just the fourth Tiger to be named to the team, which included Florida quarterback Tim Tebow.

His motivation for community service stems from his childhood. “I have tried to give back to the community as much as I can, because I know that it wasn’t easy for me growing up. People helped my mom and our family, so I believe that it is the right thing to do. It is a way of saying `thank you’ to those who helped my family.”

Dye, who is scheduled to graduate in December with a sociology degree and plans on pursuing a career in the criminal justice field, is most passionate about helping kids better themselves. He helps by talking to elementary schools, middle schools, small groups, and churches.

As Dye’s senior year begins, he thinks back on some of his greatest memories at Clemson and some of the things he will miss. “Playing football at Clemson has been a great experience,” said Dye. “Spending time with my teammates are the times I am truly going to miss. Those are the times you wish would never end.”

Dye’s many challenges and the perseverance he has displayed throughout his career have proven to be an inspiration for his success. This will be Dye’s last season playing for the Tigers. While his top individual goal is to be the team’s leading receiver, he puts the idea of winning a championship as his top goal. His team mentality further provides another reason why Swinney believes he is a key player the Tigers are counting on for success this season.