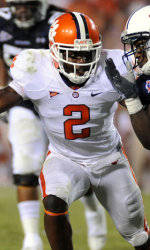 That provides a nice description of what DeAndre McDaniel means to the Tiger football team. In four years, he has transformed himself from a raw, talented, prep school product to one of the best safeties in the nation. It is well-known in coaching circles that, in order to move the football on the Clemson defense, McDaniel must be neutralized, a task that often proves futile.

“Every time I go out on the field, I try to make plays,” he said. “I know we have other guys who can step up, too. I’m just trying to do my job and help my teammates.”

Many pundits predicted his path to stardom early in his high school career, as he was a highly-regarded prospect coming out of Amos P. Godby High School in Tallahassee, FL. Then-Assistant Coach Dabo Swinney recruited McDaniel to Clemson, and the relationship formed during the last two years of his high school career continues to develop to this day. A host of major college football powers offered McDaniel a scholarship, including his hometown school (Florida State). In the end, he chose the Tigers over Alabama, Auburn, Florida, Louisville, and the Seminoles.

When he signed with the Tigers on National Signing Day in February of 2006, McDaniel soon found out that the process of getting to play Division I football was not over yet. Academic issues forced the four-star recruit to Hargrave Military Academy, where he fine-tuned his game while establishing a work ethic academically that has followed him to Clemson. He has learned to appreciate his class work, as he is now just a few hours shy of receiving his degree in December.

“Up to that point, I really didn’t care all that much about my classes,” he admitted. “My semester (at Hargrave) really showed me that I needed to take my school work seriously. I knew that if I wanted to get to where I wanted to be, my grades needed to improve. So I worked hard there, and I’m still working hard at it.”

Once he arrived at Clemson, McDaniel was able to make an immediate impact at the back of a defense that featured future NFL players Michael Hamlin and Chris Clemons. In his debut, a nationally-televised Labor Day contest against #19 Florida State, he played 39 snaps and totaled four tackles and two pass breakups. It was an experience that will remain with him forever, as the Tigers came away with a 24-18 victory.

“The atmosphere was incredible,” recalled #2. “Some of the older players told me that rubbing the Rock and running down the Hill for the first time, with the crowd going crazy and the stadium rocking, is an unforgettable experience. They were right.

“It was a good night. I didn’t have too much trouble adjusting to the speed. I went out there and played my game.”

That night was the first of many quality experiences for McDaniel against his hometown team. In his sophomore season, he had a strong five-tackle performance in his first contest in Tallahassee since high school. Then in 2009, McDaniel registered nine tackles and one interception in 73 snaps that helped cement his place in Clemson lore.

Late in the fourth quarter, Florida State was attempting to mount a drive to cut into Clemson’s nine-point lead. Christian Ponder threw a pass toward the Seminole sideline that McDaniel broke on perfectly and intercepted. As he ran down the sideline for 27 yards, the Tiger safety saw Ponder running towards him and, as he pointed his finger at the Seminoles’ signal-caller, he immediately knew how the play would end.

“When I caught the ball and started running, I thought I was going to score,” explained McDaniel. “Then I saw one of their guys running ahead of me, so I knew I wasn’t going to get there. I saw him (Ponder) and I knew it was him and me. I honestly don’t know why I pointed. I guess it was the emotion. I just hit him.”

Ponder separated his shoulder and missed the remainder of the 2009 season. McDaniel became a YouTube sensation as the clip of his ferocious hit made the rounds on the internet. The two players saw each other at the ACC Football Kickoff in Greensboro, NC in July.

“I talked with him at the Kickoff,” stated McDaniel. “I never wanted to hurt him. He is a great guy and a terrific quarterback. It was just part of the game.”

That play is, in many ways, a microcosm of McDaniel’s career…a solid player in coverage who packs a punch when he delivers a blow. His tackling ability was part of the reason that McDaniel was moved to linebacker prior to his sophomore season.

The move was made for several reasons. The Tigers needed some depth at linebacker in 2008, and the coaches saw McDaniel’s versatility and identified him as a player who could contribute there effectively. It was also an effort to get McDaniel on the field, and since he was listed behind Hamlin and Clemons at safety, playing linebacker seemed like a way to increase his snap count.

“I wasn’t mad about it,” said McDaniel. “I always felt like a safety. I’ve played there my whole life and I’m comfortable there. It took a while to get used to linebacker.”

Despite some misgivings about the position switch, McDaniel continued to produce. He amassed 77 tackles and started eight games, including the last six of the season. He also forced two fumbles and returned one for a touchdown in the Gator Bowl against Nebraska.

When Defensive Coordinator Kevin Steele took over the defense after the 2008 season, he moved McDaniel back to safety in order to ease the transition after Hamlin and Clemons graduated. McDaniel stepped in and made his presence felt immediately with 14 tackles and an interception against Middle Tennessee, then had 10 tackles and two picks at #13 Georgia Tech. He also had two interceptions in Clemson’s overtime win at #8 Miami (FL), one of which he returned 23 yards for a score. For that performance, he was named the winner of the Bronko Nagurski National Defensive Player-of-the-Week award.

McDaniel finished the 2009 season with 102 tackles, including five for loss, and eight interceptions. His performance was enough for the Football Writers’ Association to tab him as a first-team All-American, the first Tiger defensive back with that distinction since first-round draft pick Tye Hill in 2005. He had over 100 tackles and eight interceptions, the only player in the nation with triple-digits in tackles and at least eight picks.

After last season, McDaniel flirted with the NFL draft before deciding to return and finish what he started at Clemson, both on and off the field.

“My grandma really wanted me to come back and get my degree,” he said. “I want to be a role model for my younger siblings. I also want to win a championship here. That’s another reason I came back.”

McDaniel entered the 2010 campaign as a candidate for first-team All-America honors once again. He has established himself as one of the premier defensive players, regardless of position, in all of college football. He is on the watch list for the Thorpe and Nagurski awards, which will be given after the season. Many pundits have McDaniel projected as a first-round draft pick in the spring of 2011.

McDaniel has gotten off to a solid start this season. He has a team-leading 20 tackles and three pass breakups. At #15 Auburn, McDaniel showcased his athletic ability with a soaring interception, his first of the season and 12th as a Tiger.

If the senior safety has his way, there will be many more highlights to come as he attempts to leave his mark on Clemson University.