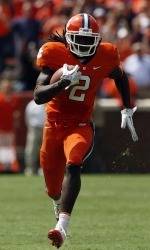 CLEMSON, SC – Dabo Swinney understands the kind of pressure that comes with a long winning streak. He was part of one himself when he was a player and coach at Alabama in the 1990s.

But, don’t think for a second Swinney was feeling sorry for 21st-ranked Auburn after his Tigers snapped the SEC Tigers 17-game winning streak with a 38-24 victory in Death Valley Saturday.

“I know how hard that is to do,” Swinney said. “They were a very good champion, but I’m glad it ended in Death Valley today.”

The nation’s longest winning streak ended thanks to a 386-yard, four-touchdown afternoon from Clemson quarterback Tajh Boyd, and 155 receiving yards from freshman sensation Sammy Watkins. In all, the Tigers (3-0) amassed 624 yards, while outscoring Auburn 31-3 from the midway part of the second quarter on.

“We had a hard time running the football early, and they challenged us on some things so we felt we had some match ups we can win in the passing game,” Swinney said. “Once we got that going, we got it rolling.”

Trailing by 14 points on two different occasions, including 21-7 following Michael Dyer’s second touchdown in the second quarter, Boyd got Clemson rolling with a four-yard touchdown pass to DeAndre Hopkins, a six-yard score to tight end Dwayne Allen, who tight roped the back of the end zone, and then 65- and 19-yard scoring passes to Watkins.

“What can you say? (Tajh) has just taken ownership,” Swinney said. “Chad (Morris) has done an incredible job with just not our offense, but Tajh in particular. His 386 yards were the second most in school history.”

Auburn (2-1) had no answer for Boyd as he completed 30 of 42 passes. He has now thrown for 911 yards and 10 touchdowns thus far, while throwing just one interception. Since a 3-for-9 effort in the first half of the season opener, the redshirt sophomore has completed 65 of 92 passes for 846 yards, 9 TDs and no picks.

“He has been so smart with the football. He knew when to throw the ball and when to pull it down and run it. I just see him getting better and better as he goes.”

And with that, so does the Clemson offense. Once Boyd found his rhythm, Clemson did not miss a step as the Tigers scored on six of their last seven possessions. The Tigers’ 624 yards of total offense ranked third all-time in history, and just the eighth time a Clemson team has topped the 600-yard mark. It was the most ever by the Tigers against an SEC team. The previous record was 524 against Auburn in 1951, the last time Clemson defeated Auburn prior to today.

Auburn had won 14 straight in the all-time series with Clemson, including last year’s dramatic overtime victory in Auburn, AL. But, there were no dramatics in front of the 82,000 on Saturday as Clemson controlled the game for much of the afternoon.

Some thanks also goes to a defense that for the third straight week did not allow a touchdown in the second half. The Clemson defense has yielded just 12 points in the second half through the first three games.

It probably was the last time Auburn lost a game.