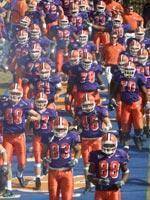 This is the third poll to rank Clemson 18th in the preseason rankings for 2006. Lindy’s and Phil Steele Magazines also had Clemson 18th. The average ranking for the 13 polls listed below is 18.5 so the USA Today poll is in line with the other rankings.

Clemson opens its 2006 season on September 2 when Florida Atlantic comes to Clemson for a 3:30 PM game that will be televised by ESPNU.