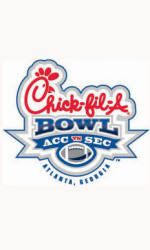 ATLANTA – After 40 years of bowl game tradition in Atlanta, the Chick-fil-A Bowl is really starting to hit its stride. And the proof is in the numbers.

Not only did Clemson and Auburn provide a great match-up of two top-25 teams, but the two Tigers gave the Chick-fil-A Bowl its first overtime game ever and an incredible game for the record 11th straight sellout crowd of 74,413. Auburn finally defeated Clemson 23-20 in a thrilling game won on the final play in the first overtime.

“These records are a result of the enthusiastic support of college football by Atlanta fans, corporations and volunteers,” said Gary Stokan, Chick-fil-A Bowl president. “We owe all of them, as well as the passionate fans of Auburn and Clemson, for these outstanding records that have once again proven that the #1 non-BCS bowl in America is the Chick-fil-A Bowl.”

Other Chick-fil-A Bowl records established this year include an all-time high $5.83 million in total team payout, a record attendance of 35,486 at the Bowl’s pre-game FanFest presented by Coca-Cola and a record $1.04 million in charitable and scholarship contributions that nearly doubled last year’s record of $531,000.

“The Chick-fil-A Bowl does a great job of translating the experience to the team, with the entertainment for the players and the hospitality,” said Clemson head coach Tommy Bowden. “With their hospitality, sponsorship and facilities, this is as good as any bowl, including the BCS bowls.”

“This has been a good week – it’s like our last family reunion for our seniors,” Auburn head coach Tommy Tuberville said. “The Bowl volunteers have been great – they’re really the ones who do all the work and take care of our families; this Bowl is number-one in regards to players and having a good time.”

But, perhaps Auburn’s Quentin Groves said it best, “I love it man, this is a great bowl! I spoke to some of my colleagues around college football and they say they like the Chick-fil-A Bowl better than any other bowl. That speaks volumes for the bowl game and the people they have working it. I thank God that we got a chance to even be in this bowl game.”

The Chick-fil-A Bowl is the longest-running rivalry series of top-ranked teams from the ACC and SEC and is recognized as one of the most competitive bowl games in college football. The Chick-fil-A Bowl owns exclusive rights to the first selection in the ACC – after the BCS – and is the highest-attended non-BCS bowl game in the country over the last 10 years.