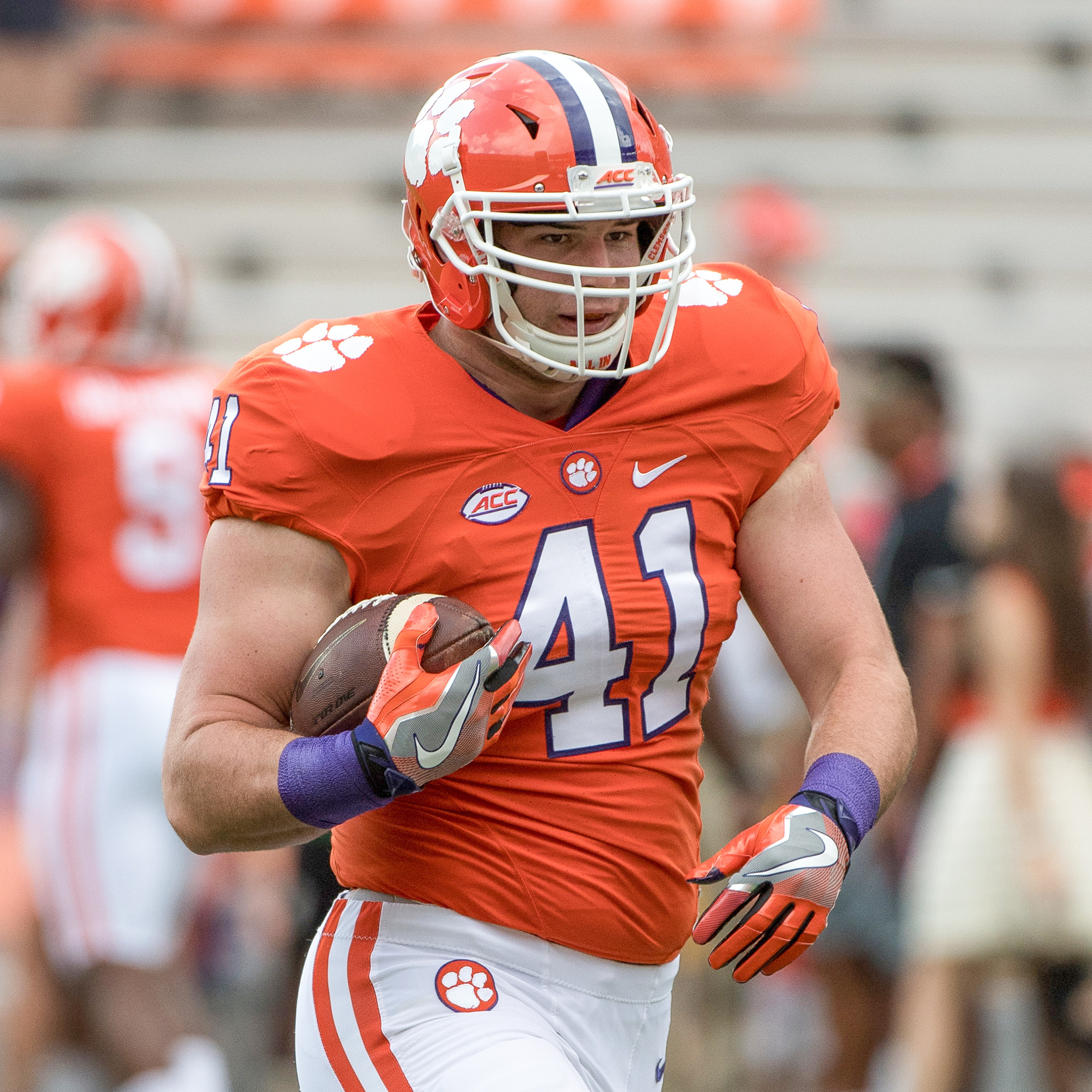 Due to his father’s career, tight end Grant Radakovich has lived in a multitude of sports-oriented communities throughout his life, but none have made an impact on him quite like the Clemson community.

When discussing what makes the Clemson community so different, the son of director of athletics Dan Radakovich said, “They really do take the family aspect of it very seriously. Clemson really takes pride in that.”

A scholarly person both in the classroom and on the football field, Radakovich earned a finance degree from Mercer before transferring to Clemson for his final season of football eligibility. Currently pursuing an MBA, Radakovich plans to enter a career in finance or sales.

A key cog on special teams, specifically the kickoff return team, his primary goal for the rest of the season is to, “keep owning and embracing my role.”

An intelligent player and a solid blocker, Radakovich is a valuable commodity for Clemson’s special teams. He showed his athletic ability with an eight-yard reception against SC State in September. He hurdled a Bulldog at the end of the run, much to the enjoyment of his teammates and Tiger fans.

He has enjoyed his time at Clemson thus far, partly because of the quality time that he has spent with his parents. But in the office, his relationship with his father is strictly business.

Out of office, though, the father-son duo is extremely close, and he appreciates having the opportunity to balance that special relationship with his father both on campus and off.

“It’s unique to be able to call and ask him to go to lunch.”

Boasting a keen business sense, Radakovich’s future in the corporate world is exceptionally bright. He held an internship in the summer of 2013 with Marucci Sports, a baseball bat manufacturer, in Baton Rouge, La., and gleaned an excellent hands-on education through his responsibilities.

From crunching numbers to conducting customer service calls, Radakovich was able to acquire a plethora of business skills.

“Learning and finding my voice…that was what I mainly got out of that internship.”

Radakovich plans to return to Mercer in order to finish his MBA in the spring and will live with his older brother, Christian, in the Atlanta area.

Until then, Radakovich is fully invested in the Tigers and enjoying every moment of his final football season. After playing for three years in an upstart Mercer program, which in 2013 played its first game since 1941, Radakovich is soaking in his first experience at the FBS level this fall.

The young season has already brought with it several surreal moments for Radakovich, including the most storied of Tiger football traditions.

“Running down the Hill for the first time was something special and different, something that I had never experienced before.”

Describing the first game of the season, a road matchup at Auburn, as “electric,” Radakovich is taking it all in for what is the end of a satisfying college career on the gridiron.

Following in his father’s footsteps, he is sure to be a successful leader one day, as his ambition and determination are impossible to ignore.

Though he is only wearing orange for one season, Radakovich is a Clemson man in every way.