Prior to the 2022 season, Clemson fans were elated once news broke that star kicker B.T. Potter would be returning for one last season. During the previous four years at Clemson, Potter racked up lofty numbers, building up an exceptional football resumé.

Playing such a high-pressured position can be a daunting task, but Potter has managed to keep his composure on the field, allowing him to accumulate memorable kicks in over four years in Tigertown.

Returning for a fifth season can be a hard decision, but for Potter, the opportunity to spend another year at Clemson was too good of an offer to pass up.

“The thing that drew me to coming back is how great Clemson is. I was riding through Clemson one night, and it hit me that this is a part of who I am, and this is a place that I will always love and cherish.”

With the Tiger special teams unit being young this season, Potter is eager to help develop the players following in his footsteps.

“Looking at our special teams unit, we are really young this year. I wanted to come back and help them get started with their careers and do whatever I can to make sure they are prepared whenever their time comes.”

Besides spending his fifth year stepping into a leadership role to help guide the younger special teams players, he has also prepared to contribute at punter. He previously punted at South Pointe High School before enrolling at Clemson and getting reps at the position.

With great responsibility comes great preparation, and Potter is doing all of the things necessary to ensure that his kicking leg is at peak performance when the game begins. Staying top-notch for games requires Potter to take fewer, more purposeful repititions during practice.

“I prepare in a way that I can go out and do my best. I am always staying prepared, because I know that can help the team if it comes down to it.”

Potter has been able to develop a powerful leg that many deem to be a “cannon.” However, his kicking would not be at the level it is today without his prior soccer experience.

“Growing up, I played soccer, and it got me to where I could swing my leg in a motion that would then transfer over to football.”

Since he arrived at Clemson in 2018, the strength staff has ensured that Potter’s kicking stays at its maximum potential.

“The strength staff has helped a lot through the years. It is a lot different to train kickers compared to other players.”

In addition to the excellence that Potter has generated on the gridiron, he has also been excelling off the field. He earned his degree in sports communication in December and has since shown his eagerness to learn more.

“I cannot even count all the things Clemson has done for me. I will eventually earn two degrees, as I am doing work towards my master’s degree now. The people I have met through Clemson football are able to help assist whenever my playing days are over. That is one of the best things about Clemson and the alumni here.”

As Potter reminisced on his first four years and looked ahead to his fifth, he explained his gratitude for all of the opportunities he has been given and the people he has met along the way. He truly has taken full advantage of all that Clemson has to offer, including his two most recent microinternships. He spent time at Segars Ranch in Montana for his first microinternship.

“We were able to do a lot of cool things. It was the first time I had ever gone to a coal mine…that was absolutely crazy. We also were able to work on the ranch, and it changed my perspective about a lot of things and helped me appreciate what other people do for their careers. It was very eye-opening.”

Potter also had the opportunity to complete a microinternship for the Adobe sales department, where he showed much interest.

“I really enjoyed working with Adobe, and I know it is what I want to do whenever football ends. It was cool to build some relationships and open up some opportunities for a job whenever I am done playing.”

As the Tiger football team is in full throttle for the 2022 season, Potter shared that he has seen some similarities between this year’s team and the 2018 national championship team.

“The relationships and the bonds that I created that year stand out to me. We were a really close team, and there was no one on that team who I could not go to and talk to. We really had a love for each other.

“We are feeling the same way about this team. Everyone is happy to be here and be around each other. Everyone has the same goal in mind, which is very important.” 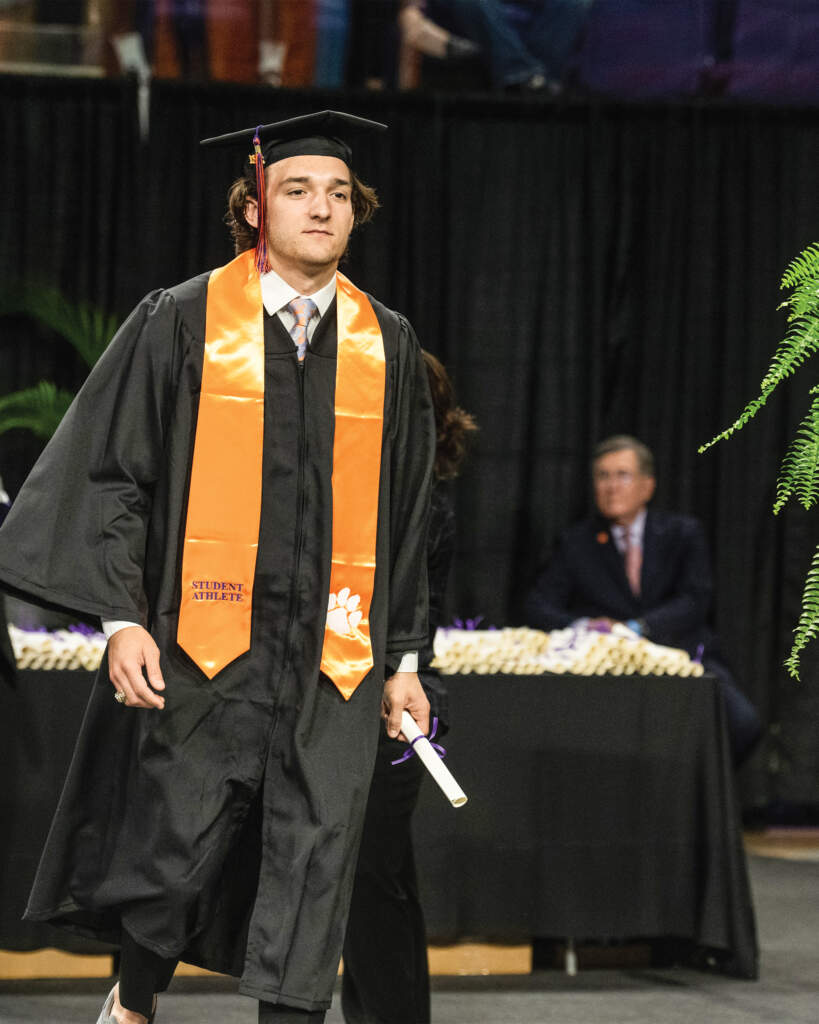