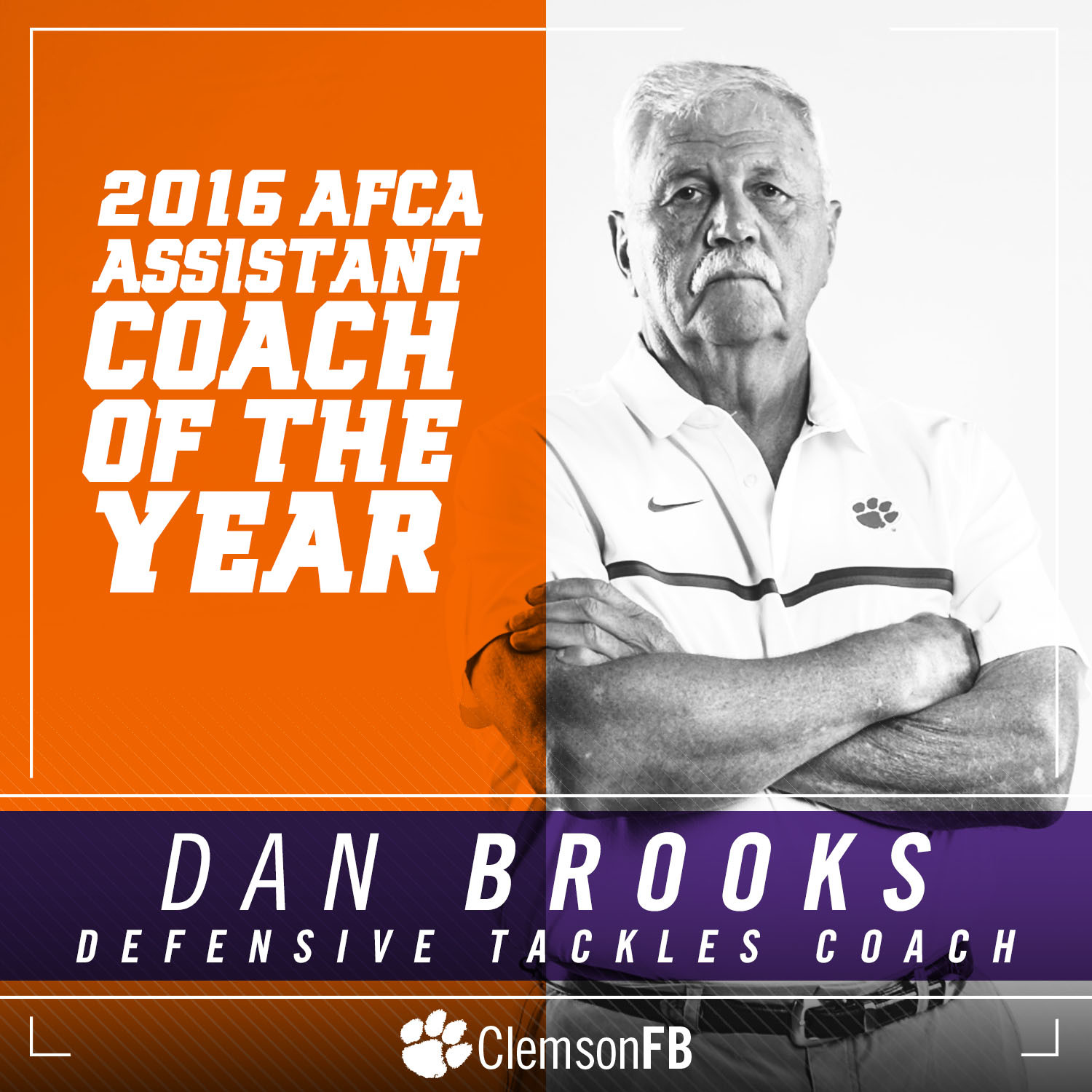 Brooks Named Assistant Coach of the Year by AFCA

Clemson, S.C.—Clemson Associate Head Coach and Defensive Tackles Coach Dan Brooks has been named the National Assistant Coach of the Year for the Football Bowl Subdivision by the American Football Coaches Association.

The Assistant Coach of the Year award was first presented in 1997 and was created to honor assistant coaches who excel in community service, commitment to the student-athlete, on-field coaching success and AFCA professional organization involvement.

Brooks, who is in his eight season at Clemson, is the first Clemson coach to win the award. The Tigers have an 82-25 record since he joined Dabo Swinney’s staff in 2009.   His defensive line is a big reason Clemson has had more tackles for loss than any other school in the nation over the last five years and ranks second in the nation in that category in 2016.

This year’s Clemson defense ranks in the top 10 in the nation in tackles for loss, sacks, scoring defense, total defense and pass defense, a big reason the Tigers are 11-1 and are ranked third in the latest College Football Playoff ranking.

Clemson has finished with at least 10 wins each of the last six years, joining Alabama as the only schools that can make that claim. The Tigers face Virginia Tech in the ACC Championship game on Saturday.

Now in his 33rd year as an assistant coach, Brooks coached in his 400th game at the FBS level last September.   He has had 30 of his former players drafted by the NFL, including seven in the first round, coached 15 all-conference selections, and an Outland Trophy winner.

Off the field, Brooks is a longtime member of the AFCA and has served on AFCA committees for 30 years. He is significantly involved with Crosspoint Church and volunteers his time with several different organizations such as the Boys and Girls Club, All In Team Foundation, Meals on Wheels, Wounded Warriors and Paralyzed American Veterans.

Brooks also served as co-host of the Picnic in Pittman fundraiser each year, which benefits the Friends of the Great Smokey Mountains.

“Once again, five outstanding assistant coaches have been selected for their dedication, not only to their teams, but to their communities,” said Executive Director Todd Berry. “Often times, the head coach receives much of the credit for his team’s success, but any head coach is only as good as his assistants. Much of an assistant coach’s work is done behind the scenes. It is our pleasure to bring it to the forefront.”

Winners of the Assistant Coach of the Year Award will receive a plaque to commemorate the award. They will be honored at the AFCA Honors Luncheon, Monday, January 9 at the 2017 AFCA Convention in Nashville, Tennessee.