While hunkering down in a jam-packed stadium during a torrential downpour, Cornell Powell had an epiphany, realizing that his future was destined to run through Clemson and recognizing just how badly he wanted to become a Tiger.

Powell, now a senior wideout, was swayed to play for the Tigers after attending their heart-pounding 24-22 victory over Notre Dame in October 2015. The thrilling matchup was played in front of a raucous Memorial Stadium crowd in the midst of monsoon-like rainfall brought on by Hurricane Joaquin. Attending that riveting contest won Powell over and sparked the true beginning of his Clemson journey.

“That game pushed me over the edge and made me think, ‘I want to play in this environment.’ The atmosphere was amazing.”

Although it may seem surprising that spending a rain-soaked evening in a frenetic environment would be the blissful experience that it was for Powell, that detail makes perfect sense when factoring in his forward-thinking outlook on life.

The wideout from Greenville, N.C. is constantly planning ahead, proactively plotting out his future and opting to make the most of every opportunity presented to him. For many seniors in high school, that fateful night at Death Valley would have been nothing more than a fun time, but for Powell, it opened his eyes to a bright future made possible by Clemson football.

Since becoming a member of the Clemson family thereafter, Powell has never looked back, and he credited the infectious winning attitude that is synonymous with the Tiger program for bettering him as a player and person.

“It’s helped me compete and be the best version of myself. Seeing my teammates make plays pushes me to work that much harder to make plays.”

Powell is one of many talented pass catchers to suit up for “Wide Receiver U” during Head Coach Dabo Swinney’s Clemson tenure, and his contributions on the gridiron have certainly been impactful.

However, Powell’s off-field contributions have made an even broader impact, as he has stimulated change within the Clemson community and potentially played a role in carving out some of his teammates’ career paths.

In June 2020, Powell was at the forefront of Clemson football’s peaceful demonstration on campus. As one of the leaders in the locker room, he helped organize the team-led event, which was put together in order to draw attention to social issues.

“It was powerful because it showed athletes around the world that we’re more than just athletes,” said Powell of Clemson’s demonstration and the countless other peaceful protests taking place within college athletics at that time. “We’re human beings with thoughts and feelings, and what we say matters just as much as the next person.” 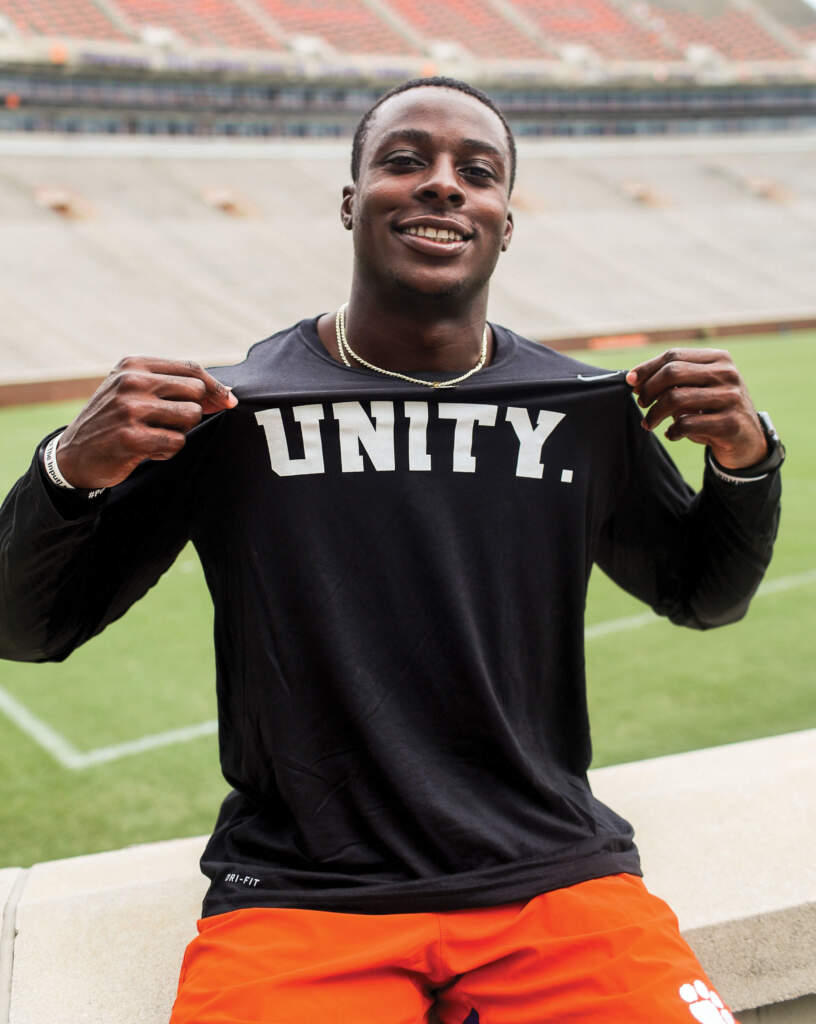 “Being able to help lead my team and see the whole community, including the Clemson University Board of Trustees, President and Athletic Director, get behind us was amazing. It showed that our voices have power. The strength is in the numbers, and when we come together, good things like that can happen.”

Another leadership role that Powell has embraced within the Clemson program is his elected position as a P.A.W. Journey ambassador. P.A.W. Journey is Clemson football’s renowned leadership initiative, which prioritizes community service, life skills and career development for each player, and Powell was chosen by his peers to serve as a voice for the team through his ambassador position. Aligning with his proactive attitude, Powell has generated ideas for community service projects, internships and economic literacy courses through P.A.W. Journey and has also assisted with recruiting business leaders to visit campus and address the football student-athletes.

“P.A.W. Journey allows us to tap into our potential as student-athletes so that, when we enter the real world, we’ll be successful outside of football,” said Powell, who has completed two microinternships facilitated by P.A.W. Journey. “It brings the best out of us.”

Creating opportunities for others is an everlasting goal for Powell, and once his playing career is done, he aims to work in the sports apparel industry and aspires to own his own business someday. Running a nonprofit organization dedicated to supplying sporting goods to youth sports teams in underprivileged communities is another aspiration of Powell’s.

Until that day comes, or, as Powell so aptly describes it, “once the air goes out of the ball,” the receiver plans to continue giving it his all on the gridiron. As for his senior season, Powell desires nothing short of going out on top.

“The ultimate goal for every season never changes. It’s to be the best team in the nation and win a national championship. And that starts by putting the work in, day in and day out.”

A former standout at J.H. Rose High School, Powell has paid his dues in the Tigers’ receiving corps since enrolling at Clemson in 2016. He has been a downfield threat and has also made a mark as a kickoff returner.

Powell has dreamed of playing in the NFL since childhood, and he is thankful for the development he has experienced while playing for Swinney and his staff, which has inspired him to stay true to his football passions and pursuits for as long as possible.

All it took was an unforgettable night in Death Valley for Powell to realize his path to success started with Clemson University and ended with innumerable opportunities to make a difference in society. The rainfall on that pivotal October evening might have made for a dark, gloomy present, but, when it comes to Powell, it set the wheels in motion for the brightest of futures.