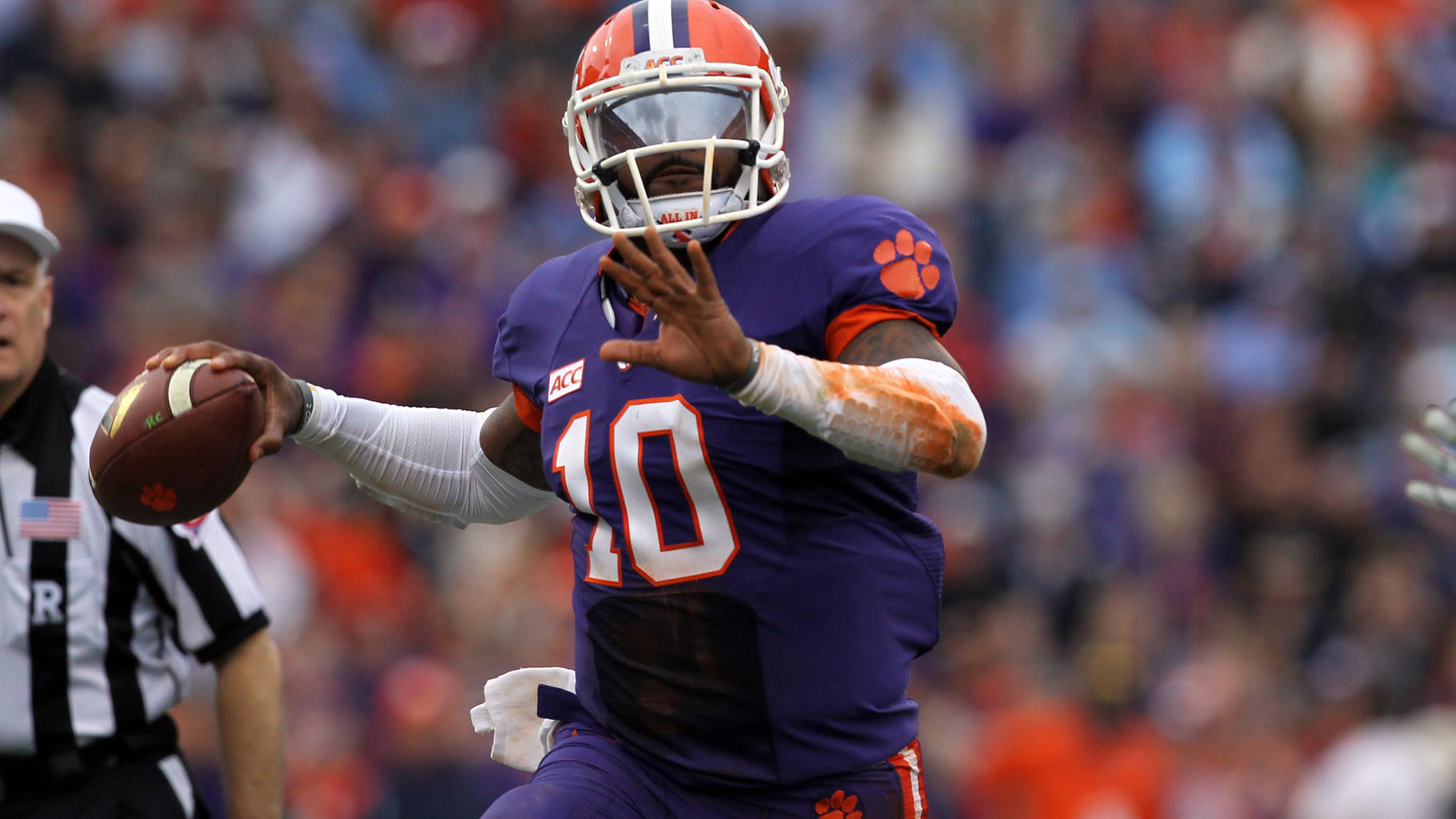 Boyd, Seniors Put On One Last Show in Win over The Citadel

CLEMSON, SC – Tajh Boyd stood atop The Hill, flashed his trademark smile and waved goodbye to the Death Valley crowd. Then he went out and put on one last show.

The senior quarterback threw five touchdown passes – to five different receivers, all before halftime – and No. 7 Clemson beat The Citadel 52-6 on Saturday on Senior Day at Memorial Stadium.

“It was sweet,” Boyd said. “I don’t think there’s a better way to end your home career – I had five touchdowns or whatever, but it was just enjoying the moment with the guys out on the field, some of the linemen, the defense, talking to Sammy (Watkins) and those guys, and just the memories that you’ll take from that.”

Boyd completed 21 of 28 passes for 288 yards and tied the school record with five touchdown passes, the sixth time he has done that in his career.

Another senior, Roderick McDowell, led the Tigers with 108 rushing yards on 21 carries, his third game with at least 100 rushing yards this season.

“It was a very emotional day for me,” McDowell said. “It was very touching knowing it’s my last time running down The Hill, playing with these boys at home, and our fan base at home, I love it. I’m going to miss it so much.”

With the victory, Clemson (10-1) has now won at least 10 games in three straight seasons, its longest such streak since it had four straight 10-win campaigns from 1987-90.

“I told the seniors to leave Clemson better than when they got here,” head coach Dabo Swinney said. “Tajh has made us an elite program again. He embraced his role and enjoyed every second as the quarterback at Clemson University. His vision was to leave his mark on Clemson, and he has done that.”

Clemson was forced to punt on the game’s opening drive, but Watkins caught an eight-yard pass on the first play from scrimmage that gave him 3,021 yards receiving in his career, which moved him past former teammate Hopkins atop the school’s all-time receiving yardage list.

“I didn’t even know at first,” Watkins said. “I knew I needed seven yards (to tie the record), but I realized it after they announced it. It’s a great accomplishment. I cherish those moments.”

The Tigers opened the scoring on the next possession, as Boyd hit tight end Stanton Seckinger down the sideline for a 24-yard touchdown to put Clemson up 7-0.

After a punt by The Citadel, the Tigers doubled their lead with a 30-yard touchdown to Mike Williams on a corner route, as Boyd marched the offense 95 yards on eight plays and needed just 1:57 to do it.

Boyd threw his third touchdown pass of the day early in the second quarter, lofting a fade to Watkins, who went up and snatched the ball away from a defender for an eight-yard score.

“Tajh did a great job of putting it on my outside shoulder, and I made a play,” Watkins said. “Coach Swinney really wanted me to score that touchdown so I could get out of the game, so it was a great feeling.”

The Clemson defense got involved in the scoring on the ensuing possession, as Garry Peters hit Bulldog quarterback Ben Dupree on an option play to force a fumble, and Quandon Christian scooped up the ball and returned it 22 yards for a touchdown.

“I had my eyes set on the end zone, and Grady (Jarrett) had a great block that got me there,” Christian said. “It was an awesome feeling. … I didn’t want to let the ball go when I got it. So I ran to the sideline with it.”

The Tigers stretched their lead to 35-0 as Boyd hooked up with Martavis Bryant on a 19-yard touchdown.

Boyd got his fifth touchdown pass of the half thanks to the handiwork of McDowell. Boyd swung a pass out of the backfield to his senior classmate just inside the 15, and the running back juked a pair of defenders, outran two more and dove across the goal line for a nine-yard score.

The touchdown made it 42-0 with 1:12 left in the first half, and that was the score at halftime.

The teams traded field goals in the third quarter, with Chandler Catanzaro making a 32-yarder to make the score 45-3. The kick also gave him 395 points in his career, which made him the second-leading scorer in ACC history.

Boyd, meanwhile, played the first two drives of the second half for the Tigers, and he began to run back out on to the field for a third.

But Clemson called a timeout, and Boyd trotted off to the sideline, where he was met with a big hug from Swinney and a huge ovation from the crowd.

“Martavis said, ‘You can get the (single-game passing touchdown) record if you stay in the game and get one more touchdown, man,'” Boyd said. “I think I’ve got enough records. We were just trying to get the win and come out healthy.”

The Tigers added to the lead at the end of the drive with Cole Stoudt at the controls. Facing fourth-and-goal, Stoudt shoveled the ball to Daniel Rodriguez, who took the pass two yards for a touchdown to make it 52-3 in the fourth quarter.

It was the first career touchdown for Rodriguez, who carried an American flag down The Hill prior to the game as part of the Military Appreciation Day festivities.

“It’s just awesome to be a part of this culture and part of this university,” Rodriguez said. “Coming from what I’ve gone through to coming here, it’s just been a great transition from leaving one military family to a Clemson family.”

Rodriguez is a U.S. Army veteran who earned a Purple Heart and Bronze Star Medal With Valor for his heroism at the Battle of Kamdesh in Afghanistan.

“It was a special moment getting to see Daniel Rodriguez in the end zone,” Swinney said. “God has a way of working it out, and it was great to see our own Purple Heart recipient get a score.”