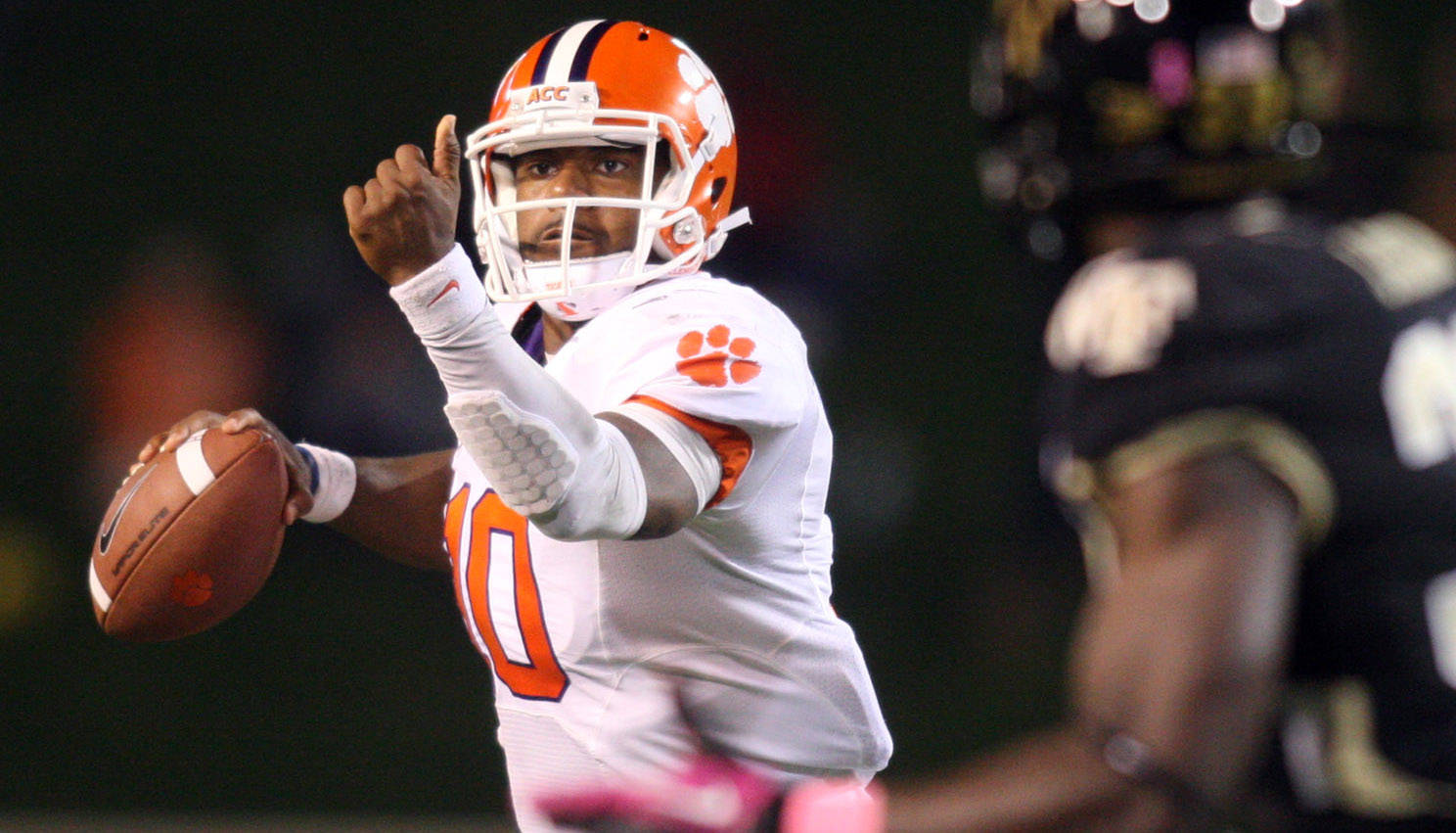 Boyd and Watkins Named ACC Football Players of the Week

Bernard had 304 all-purpose yards and scored three touchdowns, capping his big day with a 74-yard touchdown return for a touchdown that snapped a 35-all tie with 13 seconds remaining and lifted the Tar Heels to their first win over the rival Wolfpack since 2006.

Cooper played 85 snaps, posted 18 knockdown blocks and graded out at 90 percent as the Tar Heels recorded 570 yards of offense in earning his second ACC Offensive Lineman of the Week honor this season. The weekly honor is also the second of the season for Bernard, who was also named the ACC Offensive Back of the Week on Oct. 8.

Clemson, Florida State and Maryland joined North Carolina in seeing two players from their squads receive weekly honors, and one player was honored from NC State.

Florida State’s Christian Jones earned Linebacker of the Week honors after making 11 tackles, including eight solo stops and four tackles for loss as the Seminoles limited Duke to a season-low 232 yards in a 48-7 victory. Freshman cornerback Ronald Darby was named the Co-Defensive Back of the Week after playing a key role in a stout Florida State pass defense that limited the Blue Devils to just 129 yards through the air.

ACC Defensive Lineman of the Week Joe Vellano of Maryland was part of an effort that limited Boston College to just eight net rushing yards in the Terps’ 20-17 loss. Vellano recorded 2.5 sacks that resulted in 22 net yards of lost yardage. Terrapin WR Stefon Diggs was named ACC Rookie of the Week for the third time and picked up his fourth overall weekly honor after posting career highs with 11 catches for 152 yards.

NC State cornerback C.J. Wilson earned Co-Defensive Back of the Week honors after coming up with two turnovers in the Wolfpack’s road loss to North Carolina.

OFFENSIVE BACK – Tajh Boyd, Clemson, Jr., QB, 6-1, 225, Hampton, Va.Boyd completed 27 of 38 passes for 428 yards and five touchdowns without an interception in Clemson’s 42-13 win over Wake Forest last Thursday night. He also had 16 carries for 27 yards, giving him 455 yards of total offense. The 428 yards passing were an all-time Clemson single-game record, while his 455 yards of total offense were second best. Boyd threw all five of his touchdown passes in the first half, including four in the second quarter when he took the Tigers to 28 points. That set a record for touchdown passes in a half as well. He tied the single-game touchdown record. His pass efficiency rating for the game was 208, also the best in school history given a minimum of 35 attempts.

RECEIVER – Sammy Watkins, Clemson, So., 6-1, 200, Fort Myers, Fla.Watkins had eight receptions for 202 yards and a touchdown in Clemson’s 42-13 victory over Wake Forest. Watkins touchdown was a 61-yard catch and run down the sidelines in the second period. He had 177 receiving yards in the first half when Clemson broke the game open. He had three catches of at least 50 yards in the game, also a first. The 202 receiving yards set a Clemson single game record, breaking the previous record of 197 yards by DeAndre Hopkins earlier this year at Boston College. Watkins also had four yards rushing to finish with 206 all-purpose yards.OFFENSIVE LINEMAN – Jonathan Cooper, North Carolina, Sr., OG, 6-3, 295, Wilmington, N.C.Cooper played 85 snaps, posted 18 knockdown blocks and graded out at 90 percent as the Tar Heels recorded 570 yards of offense in a 43-35 victory over NC State. Carolina rushed for 212 yards, averaging 5.4 yards per carry. Cooper has not allowed a sack all season.

DEFENSIVE LINE – Joe Vellano, Sr., Maryland, DE, 6-1, 285, Rexford, N.Y.Vellano was part of a defensive line that allowed Boston College to rush for just 8 net yards on 27 attempts. The senior recorded five tackles, including 2.5 sacks to total minus-22 yards, and also forced a fumble that the Terrapins recovered. Vellano leads the ACC and is tied for ninth nationally with 1.75 tackles for loss per game. He’s played a big role on a defense that ranks fourth nationally against the run, having surrendered just 77.6 yards per game.

LINEBACKER – Christian Jones, Jr., Florida State, OLB, 6-4, 240, Winter Park, Fla.Florida State set the tone from the start on defense vs. Duke, and Jones played a huge role in that performance. The second-year starter registered eight of his season-high 11 tackles in the first quarter and three of those were tackles for loss, which eclipsed his previous career-high of two. He finished the night with four tackles for loss, while eight of his 11 tackles were solo stops. Florida State’s defense, which leads the ACC in every major category and ranks second nationally in total defense, limited the Blue Devils to a season-low 232 total yards.

CO -DEFENSIVE BACK – Donald Darby, Fr., Florida State, 5-11, 176, CB, Oxon Hill, Md.Continuing his season-long role as the first corner off the bench for the Seminoles, Darby was instrumental in another shutdown performance by the Florida State defense. He finished with four tackles (three solo stops) and provided solid coverage on a day when Duke’s passing game could not get going. Florida state limited Duke quarterbacks to 129 passing yards on a 16 of 37 performance and shut down Blue Devils’ receiving star Connor Vernon, who had three receptions for 12 yards. The Seminoles rank fourth nationally in pass efficiency defense (90.89) and sixth in passing defense (154.22 ypg).

CO -DEFENSIVE BACK – C.J. Wilson, Gr., NC State, 5-11, 185, Lincolnton, N.C.Wilson played 59 snaps at UNC and made two of the biggest defensive plays of the game. He created two Tar Heel turnovers in the red zone, as he intercepted a pass in the end zone and stripped another ball out of the receiver’s hands at the NC State 10 and returned it to the 24. Wilson also tallied three tackles and broke up another pass in the contest.

SPECIALIST – Giovani Bernard, So., North Carolina, 5-10, 205, Davie, Fla.Bernard had 304 all-purpose yards to lead North Carolina to a 43-25 victory over rival NC State. Bernard scored on a 74-yard punt return with 13 seconds to play to give the Tar Heels the victory and snap the Wolfpack’s five-game winning streak in the series. The punt return was Carolina’s first for a score against NC State since 1986. It was Bernard’s second punt return touchdown of the season, tying the school record. Bernard finished with a game-high 135 rushing yards on 23 carries and two rushing touchdowns. He also had eight catches for a career-high 95 yards and led the Tar Heels in both rushing and receiving. He scored three touchdowns and has 15 for the season in seven games and has 29 touchdowns in 20 collegiate games. In the fourth quarter, Bernard had 89 yards rushing, a 19-yard reception and a 74-yard punt return for a total of 182 all-purpose yards in the final 15 minutes. Bernard has now rushed for 930 yards and 10 touchdowns, an ACC-leading average of 132.9 per game.

ROOKIE – Stefon Diggs, Maryland, Fr., WR, 6-0, 185, Gaithersburg, Md.Diggs turned in his most productive receiving game this season, setting career marks with 152 receiving yards and 11 catches. The freshman caught a career-long 66-yard touchdown pass, marking the fourth time in the last five games he’s had a catch of at least 50 yards. It was the third 100-yard receiving game of the season for Diggs and vaulted him into 16th place on Maryland’s single-season receiving yards list with 666. That ranks second all-time among freshmen, trailing only Darrius Heyward-Bey’s 694 in 2006.