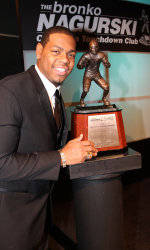 Bowers leads the nation in sacks with 15.5 and is second in tackles for loss with 25. His sack total is second in Clemson history for one season, best among defensive linemen and is the most by an ACC player since 1999 when Keith Adams had a Clemson record 16 sacks.

Last week, Bowers was named the ACC Defensive Player of the Year.