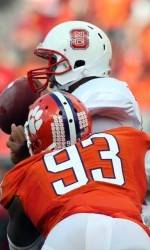 CLEMSON, SC – Clemson defensive end Da’Quan Bowers has been named one of 15 “Players to Watch” for the 2010 National Player of the Year Award presented by the Walter Camp Foundation. Bowers and Auburn defensive tackle Nick Fairley are the only two defensive players on the list.

Bowers leads the nation in sacks with 13.5 and is second in tackles for loss with 22. He leads the Clemson team in tackles with 60. The sack total is already a Clemson season record for a defensive lineman and second most in school history behind the 16 Keith Adams recorded in 1999. His tackle for loss total is the most by a Clemson defensive lineman since 1991 when Rob Bodine had 27.

Bowers has recorded a sack in eight straight games, tying the record of eight by Gaines Adams in 2006. Bowers will look to break that mark on Saturday when the Tigers play at Wake Forest.