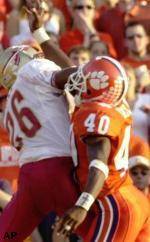 John Lovett, who was named defensive coordinator last week, will coach the secondary. Jack Hines, Clemson’s secondary coach the last three years, will move to the linebackers, a position he coached at Auburn from 1996-98. Theilen Smith will remain defensive line coach and Rodney Allison will again coach the defensive ends, positions they have coached the previous three seasons at Clemson.

“When Bill Oliver came to Auburn as defensive coordinator to coach for my brother Terry, Jack moved from the secondary to linebackers,” said Tommy Bowden. “Auburn went on to win 10 games in 1997 and played in the SEC championship game. Takeo Spikes (now Pro Bowl linebacker with the Cincinnati Bengals) was one of the linebackers he coached at Auburn. John has coached all the positions on defense, but has the most experience with the secondary.

“We have met as a staff and feel this is the best alignment for the defense from a coaching standpoint. I look forward to the beginning of spring practice and the return of 19 of our top 22 defensive players from last year.”