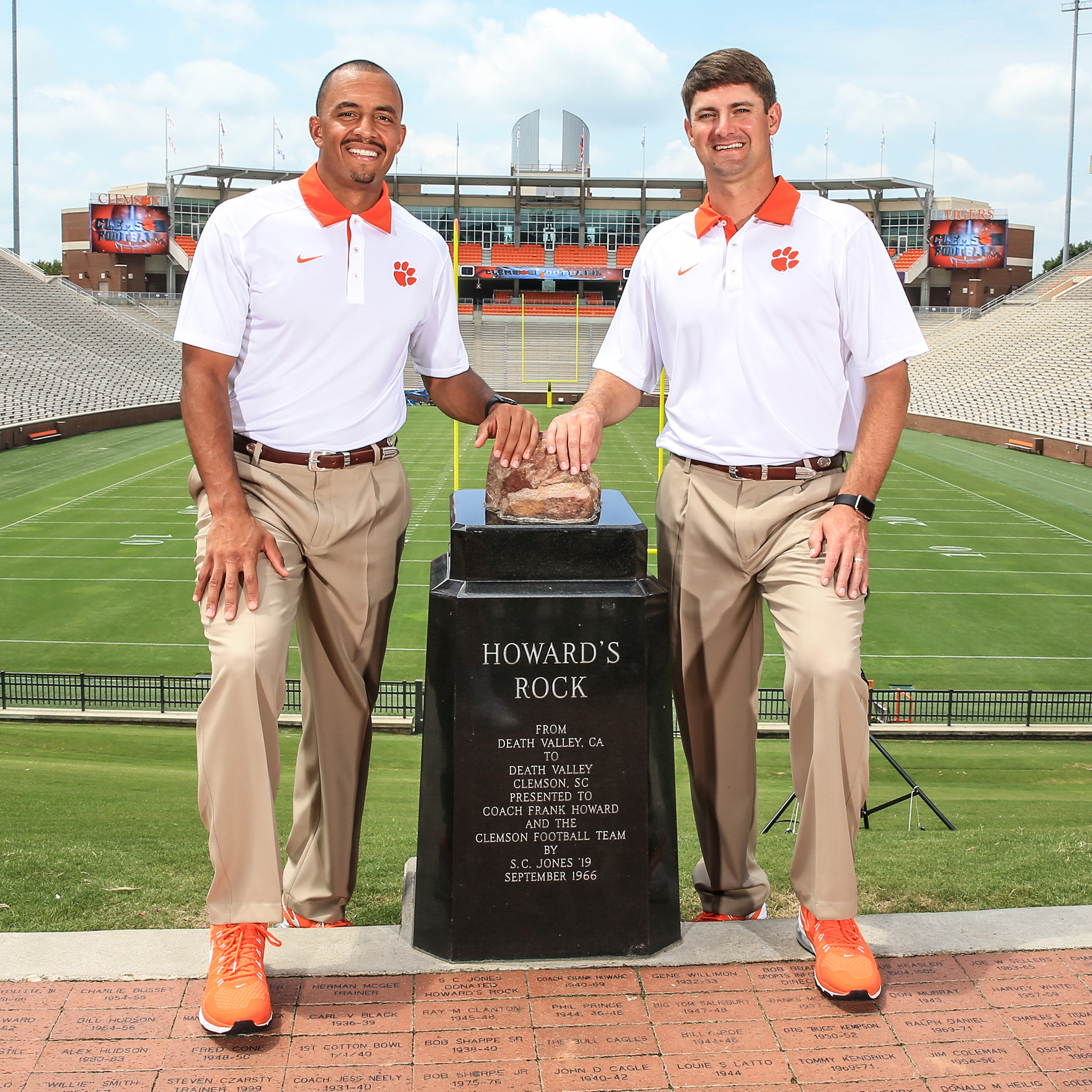 In the spring of 2000, two paths crossed. They did not know it at the time, but in only 15 years, they would be co-offensive coordinators for the top college football team in the country. Tony Elliott and Jeff Scott were teammates before they were friends and friends before they were coaching colleagues. Scott recalled the first time he met Elliott on the practice field.

“I had a lot in common with Tony right off the bat because I came in as a walk-on, and he did as well.

“Walk-ons tend to look out for each other, especially at the same position. We connected really early, which led into us being stretch partners (pre-practice calisthenics) through our few years together.”

“Jeff was a hard worker, by-the-book kind of guy. I could see we had a lot of the same values. He was driven in the classroom, wanted to be successful and was going to do whatever it takes. It didn’t matter about his status on the team as a walk-on, he just went to work every day.”

It did not take long for both men to return to the sideline. Scott earned his first coaching gig at Blythewood (S.C.) High School and won a state championship in his and the program’s first season. That was a first in the state of South Carolina.

Elliott began in business working with Michelin North America in nearby Anderson for two years before entering the coaching world in 2006 as an assistant at SC State.

When they learned they would be reunited on the coaching staff at their alma mater, both Scott and Elliott were overjoyed.

“When I found out we had an opening for the running backs coach and coach Swinney told me the direction he was heading, I was very excited for coach Elliott,” said Scott.

Elliott said the opportunity has been a blessing and has helped both men grow together.

“It was a blessing. I was excited for Jeff because I know he felt a lot of the same things that I felt in terms of having that opportunity to be back at your alma mater, a place that we care deeply about.

“It is very exciting to know that I got to coach with one of my former teammates, but also someone who was like-minded.”

After working on the coaching staff together for four years, Scott and Elliott earned the chance of a lifetime…to become co-offensive coordinators with a former teammate at Clemson.

“It is very rare at this level of football that you get an opportunity to coach at your alma mater, and that is something we take pride in,” said Scott.

“Obviously, having four years together in the same room, we know a lot about each other as coaches and we know each other’s strengths and weaknesses. We know how each other thinks, which really helps us.”

Elliott believes that even with the tremendous success of the Tiger program this season, the pair has only gotten stronger. Clemson enters today’s game with a 10-0 record, and the offense has been successful in all phases of the game.

Clemson is one of the few teams in the country in the top 25 in the nation in many rushing and passing areas. The team has had a school-record six consecutive 500-yard games. Including last year’s Russell Athletic Bowl win over Oklahoma, the Tigers are 11-0 with Elliott and Scott running the offense.

“We had a great working relationship prior to the new responsibility,” said Elliott. “We are both pulling in the same direction.

“With the way things are going this year, egos have never come into play. We understand that it takes both of us and that two sets of eyes are better than one.”

Scott lends part of their success to the former offensive coordinator, Chad Morris, for allowing them to make decisions in game settings.

“I have to give credit to coach Morris, especially in his last two years here, because he gave both Tony and me a lot of responsibility in the game planning, and even helping on certain Saturdays with different calls and situations.”

But Scott also credits a less tangible feeling for the strength of the duo.

“I think the foundation goes all the way back to playing together. We still have that unspoken respect. We know each other inside and out, and we have a great relationship that goes beyond working together.”

Besides being together for 80+ hours a week on the job, Elliott and Scott have something in common outside of the game of football. They both met their wives and best friends at their alma mater.

Scott’s wife, Sara, and Elliott’s wife, Tamika, have grown closer over the years, especially this season, as they both gave birth to beautiful and healthy babies just a few weeks apart.

“With both Tamika and my wife, Sara, having kids at home, we have even more in common. Tony and I spend 80 hours a week up here together, so we help each other thoroughout this difficult time of the year.”

Scott also said their wives keep a close eye out for one another.

“Sara and Tamika talk every day. If Tony or I get home five minutes earlier than the other, they are texting each other to let the other one know. It is pretty hard for us to pull anything on them.”

Another family member that had a big impact on the duo was Scott’s father, former Tiger assistant coach and current assistant athletic director Brad Scott. Elliott recalled looking towards Scott as a father figure during his time as a player at Clemson.

“Coach Brad Scott was instrumental in me obtaining my first opportunity in coaching at SC State because of his relationship with coach Buddy Pough. I look to Jeff’s father as a father figure.”

Without the foundation they built together over the years, Elliott and Scott would not be able to enjoy the sweetness of the ride they are on together.

“The fact that we are having the opportunity to do this together is incredible,” said Scott. “We are in the middle of some of the best years of Clemson football.

“One day, we are going to be able to look back on all the success we had, and not only doing it at your alma mater, but doing it with one of your former teammates is really special. Being able to enjoy these memories is a great experience and something we both treasure.”

However, when it comes to excitement about the future of their relationship, Elliott has something else in mind.

“The thing I am looking forward to is when he gets his opportunity to be a head coach, because I know that is something that he wants to do and has been working towards.

“I am going to be Jeff’s biggest fan, his biggest advocate and provide him whatever support or advice he may need.”

Elliott and Scott have been a support system for each other for almost 15 years. They both feel like something more than friends, and it makes them feel like family.

Scott is not sure how they got quite so lucky.

“I tell people all the time that coach Elliott and I have one of the best jobs in the country, because we get to do what we love to do, which is coach football and mentor these young men at the place we love.

“The best part is we are doing it together.”