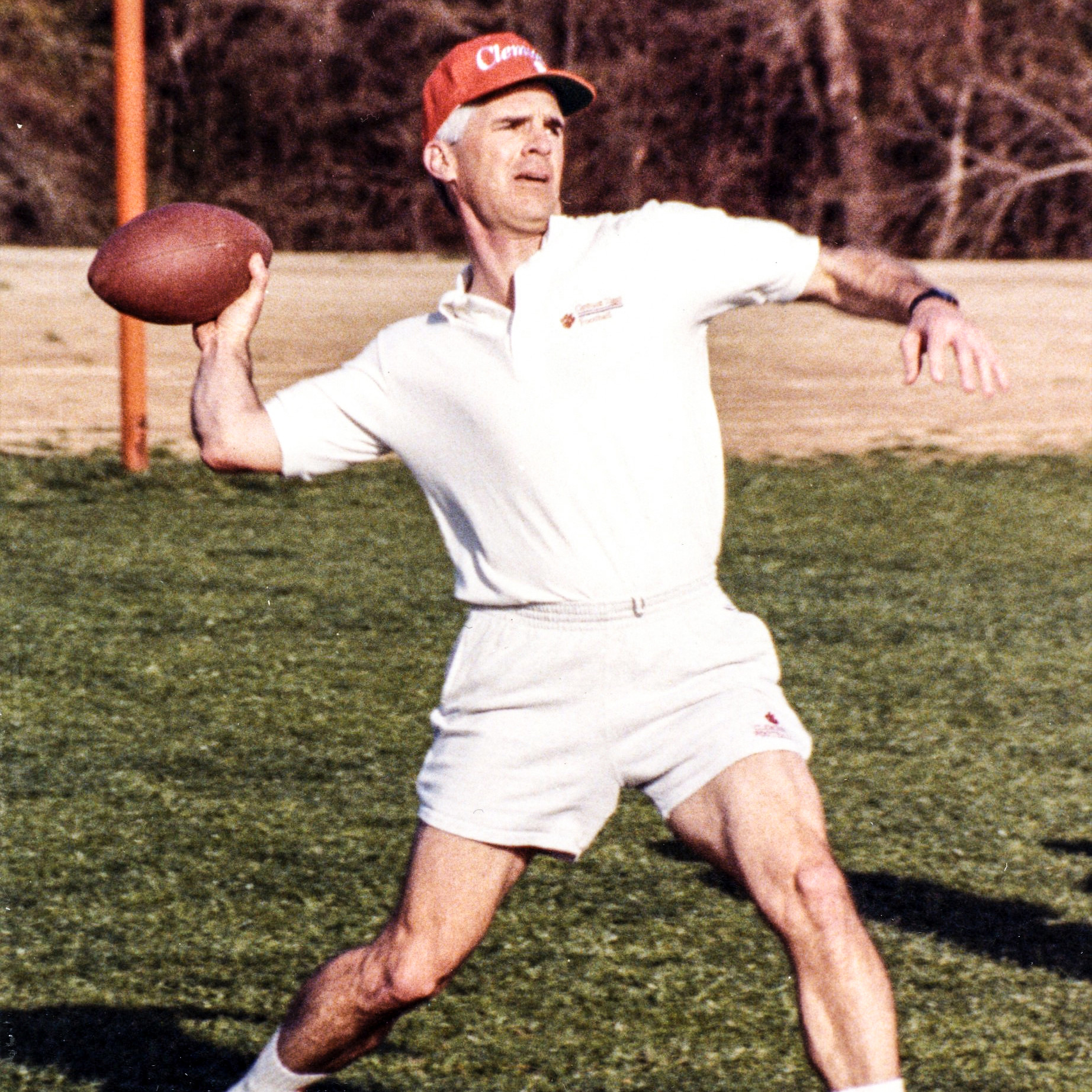 Bobby Johnson was sitting in the living room at his home in Charleston last March when his cell phone rang. The person on the other end was Bill Hancock, executive director of the College Football Playoff Committee.

“When he introduced himself, I thought, ‘What could this be about?’,” asked Johnson.

The call was an invitation to become a part of one of the most important committees in college athletics. Archie Manning had decided to step down from the committee and Hancock was looking for a replacement. He believed Johnson had the experience as a former student-athlete and respected longtime coach to be a great asset to the 13-person group.

“Bill asked me if I wanted to be on the committee,” said Johnson. “I had a pregnant pause, then told him I would. He said I could think about it a few days, but I told him on the call…I didn’t need to think it over.”

Johnson had retired from his position as head coach at Vanderbilt just before the 2010 season. Current Clemson offensive line coach Robbie Caldwell was named interim coach. Johnson was enjoying retirement in Charleston, but joining this committee gave him the opportunity to be involved in college athletics in a meaningful way.

“This gives me a chance to get back in the game I love,” stated Johnson. “I won’t be game-planning and recruiting, but I do enjoy watching games and analyzing teams. Now I will be watching all these games with a purpose.”

The College Football Playoff Committee is composed of 13 people who meet during the season and select the four teams for the college football playoff after the conference championship games, as well as the other four bowl games that are involved in the rotation of playoff sites. This year, those selections take place on December 6.

It is a committee that is composed of some of the most respected former coaches and current athletic directors in the game.

“This is a great honor,” said Johnson. “We had a meeting at the Final Four (basketball) in Indianapolis, and to walk in that room and be a part of this committee with such respected people was amazing.”

Clemson is the only school in the nation to have a former player and a current director of athletics on the College Football Playoff Committee, an example of the respect the program has attained.

Clemson’s Dan Radakovich is one of five current FBS directors of athletics on the committee. Each one of the five major FBS conferences has a representative and Radakovich was selected for the inaugural 2014 season, a big honor in itself.

Radakovich has known Johnson and followed his career for many years.

“Having been on the committee last year, I saw the value of having former coaches give their input,” said Radakovich. “Combined with Barry Alvarez, Tom Osborne and Tyrone Willingham, Bobby Johnson will give a great perspective throughout the process. He has been a respected coach for many years and he fits in with this committee. From a coaching standpoint, you aren’t selected to this committee unless you are respected for how you ran your program in every aspect. I am very pleased to have him on the committee.”

The word respect is omnipresent throughout Johnson’s resumé. That goes back to his days as a Tiger when he was a three-year starter. He started all 11 games as a wide receiver in 1970, and all 11 games in 1971 and 1972 as a defensive back. He led the team in interceptions as a junior and senior and was named Academic All-ACC both seasons.

“The credit for that meeting goes to Ben Anderson,” recalled Johnson. “I just went along for moral support.”

Johnson and Anderson were two of the team leaders and Ingram thought it was a good idea, especially for the game against the Gamecocks. Clemson won and the tradition was back.

Johnson graduated in 1973 with a degree in management. He entered the textile industry, but always had the itch to get back to the game in some capacity. His wife (the former Catherine Bonner, Clemson class of ‘73) played a huge role in starting his coaching career.

“I kept talking with her about my missing football and wanting to get into coaching, and she encouraged me to pursue it.”

That discussion led to a meeting with Dick Sheridan, who was one of Johnson’s coaches at Eau Claire High School in Columbia, S.C. In 1976, Sheridan was at Furman under Art Baker. They got together and decided to give Johnson a chance as a graduate assistant.

After the 1976 season, the defensive backs coach left and Baker decided to give Johnson a chance.

“That was the big break for me in my career,” said Johnson. “Art Baker gave me a chance as a full-time coach. I got great experience at Furman and Art Baker was a great mentor.”

Johnson made the most of it, helping Furman to some outstanding seasons. From 1976-92 with Johnson on staff, the Paladins won five Southern Conference Championships and had eight top-20 finishes at the Division I-AA level. With Johnson coaching on the defensive side the ball, Furman led the Southern Conference in total defense five times.

In 1993, Clemson head coach Ken Hatfield had an opening for a defensive coordinator and called Johnson. After 16 years at Furman, he made the move.

“We had some great players on that defense and it was a fun season,” remembered Johnson. “Brian Dawkins was a sophomore and I was his position coach. Brentson Buckner was the leader of the defensive line and of course went on to play many years in the NFL.”

That Clemson defense allowed just 16.3 points per game, 13thbest in the nation, and the Tigers finished ninth in the country in turnover margin. Winners of five games by a touchdown or less, Clemson had a 9-3 record with a top-25 final ranking in both polls.

The next year, the Furman head-coaching position opened and it did not take the program long to call Johnson and ask him to come back to lead the program. He accepted the position and his first game as head coach was at Clemson in the 1994 season opener against head coach Tommy West, who similarly had returned to Tigertown after a long tenure as an assistant.

Clemson won that game, but it was the first game in a great career for Johnson as a head coach. He guided the Paladins to Division I-AA playoffs in 1999, 2000 and 2001. His 2001 squad finished 12-3, won the Southern Conference title and reached the national championship game.

Vanderbilt came calling after that run to the championship and he was named the Commodores’ head coach for the 2002 season. He coached Vanderbilt for eight seasons and brought the program to heights it had not seen in decades. The 2008 team posted a winning record for the first time in 26 years and registered a bowl win for the first time in 53 years. He was named SEC Coach-of-the-Year. During his tenure, he also beat Auburn, Tennessee, Georgia and twice upset South Carolina.

Now, Johnson is back in the game and excited about it.

“I do feel pride in being named to the College Football Playoff Committee. They would not have called me if we did not run our programs the right way.”

Without a doubt, the only regret that Johnson has is that his close friend and former teammate, Ben Anderson, is not around to share in the experience. Anderson died after a long bout with lung cancer this past summer. Johnson gave one of the great eulogies in the history of any memorial service held in Tillman Hall.

“When it was announced (March 27) that I was going to be on the College Football Playoff Committee, one of the first people to call me was Ben,” said Johnson. “I think he might have been more excited than I was. We both followed college football very closely. In fact, Ben would have been a perfect person to be on this committee.”

The College Football Playoff Committee will have a meeting before the season, then will hold meetings the last six weeks of the season. The group releases its first poll on November 3.

After attending the first meeting in March, Johnson can tell this will be one of the most fascinating endeavors of his career.

“When you walk into the room and see Tom Osborne, Condeleezza Rice, Barry Alvarez and General Gould…

“These are smart people who want to do things the right way. They did a great job last year, but like all great people, they are working to make it better. I am proud to be a part of the process.”