When senior linebacker Baylon Spector was asked how he would describe his last four years as a Tiger, he said, “Fun…most of all, fun.”

From being the lowest-rated recruit in Clemson’s 2016-17 recruiting class, to leading the team in tackles during the 2020 season, Spector has an immense appreciation for those who have played a role in developing him both as a man and player.

“I am grateful to have had a lot of learning experiences, and it’s been exciting to see what leadership is and how my teammates work.”

Having played positions on both sides of the ball while at Calhoun (Ga.) High School and now focusing on the defensive side of the ball at Clemson, Spector is thankful to have not only been surrounded by a great coaching staff and teammates, but a great support system as well.

There is no question as to whether or not Spector understands the meaning behind what many of us refer to as “Clemson Family.” The son of former Tiger wide receiver Robbie Spector and brother of current Clemson wide receiver Brannon Spector, Baylon is proud to be a part of his family’s football legacy.

“It really is special,” he said in reference to what it is like being able to have his father in the stands and his brother lining up on the opposite side of the ball. “Just to know that my dad is out here watching both of us and we get to be out here playing is really exciting and fun.”

On Saturdays in the fall, not only can Spector rest assured that he is being supported by the Clemson Family, but by his personal family as well.

“I like that we have kept the Clemson program in the family. I’m glad I get to carry on the legacy and get to watch my brother play.”

The Clemson Family is no stranger to the other half of the linebacker duo, often referred to as “The Bruise Brothers,” with super senior James Skalski. As far as the relationship between the two seasoned defensive playmakers goes, the bond is unmatched.

“He’s like a brother to me,” said Spector. “I love him to death, and I know he would do anything for me just like I would do for him.”

Playing together for the past several seasons and constantly pushing one another to be better, the two have not only grown together as teammates, but as leaders.

“James is a great leader and has really pushed me to be a better linebacker for our defense.”

Of the 51 college players named to the Butkus Award Watch List in the preseason, the Tiger defense boasts two, Spector and Skalski.

However, Skalski is not the only Tiger leaving a lasting impact on Spector.

“Being on a team with a group of teammates, staff and coaches who value a family atmosphere and teamwork has been special.”

Relationships like these are what have made Spector’s time at Clemson so unforgettable. Aside from the lifelong friendships he has been able to make and the brotherhood he has been able to be a part of, Spector holds the staff that has assisted him in his success in high regard.

Clemson’s defensive coordinator, Brent Venables, was one of the first people to believe Spector could play at such a high level, recognizing him at one of Clemson’s prospect camps while he was in high school.

“They make it fun, and Coach Venables has the ability to bring out the best in everyone.”

Being a part of such a successful program, Spector became no stranger to the grind that it takes to achieve success amidst the most elite teams. According to #10, the Tigers’ preparation and every-day routine is what allows them to shine amongst their opponents within the realm of college football.

“Knowing what a daily routine looks like, to go in and work hard each and every day but also have a humble attitude and know that we all still need to get better has been really important.”

As far as the Clemson defense is concerned, Spector made it clear as to what he sees for the remainder of this season.

“We have a great defense and a great defensive staff. For this team, for this defense, I say legacy. I want us to display dominance and to bring it every game and every practice.”

One’s last season as a Tiger can be tough to realize, but the linebacker shared his thoughts on his plans beyond his final year with the program.

“Personally, my goal and dream is to play football as long as I possibly can, hopefully in the NFL. Also, I want to work towards finding a career outside of football, like medical sales or something of that nature.”

With his degree in hand from Clemson, Spector is set to succeed wherever life takes him, but his hopes remain with the sport that has shaped him the most. When asked what his vision is for his last run in a Tiger uniform, he was clear.

“I just want to be myself, have fun and bring others up. I want to encourage people by being a great teammate and great brother to everyone, and ultimately be a great linebacker.”

There is no doubt that while accolades such as having the most tackles in a season or boasting an abundant number of tackles for loss manifests a great feeling of accomplishment, the bond that Spector has been able to create with his family, teammates and coaching staff will always hold a special place in the heart of the Tiger linebacker. 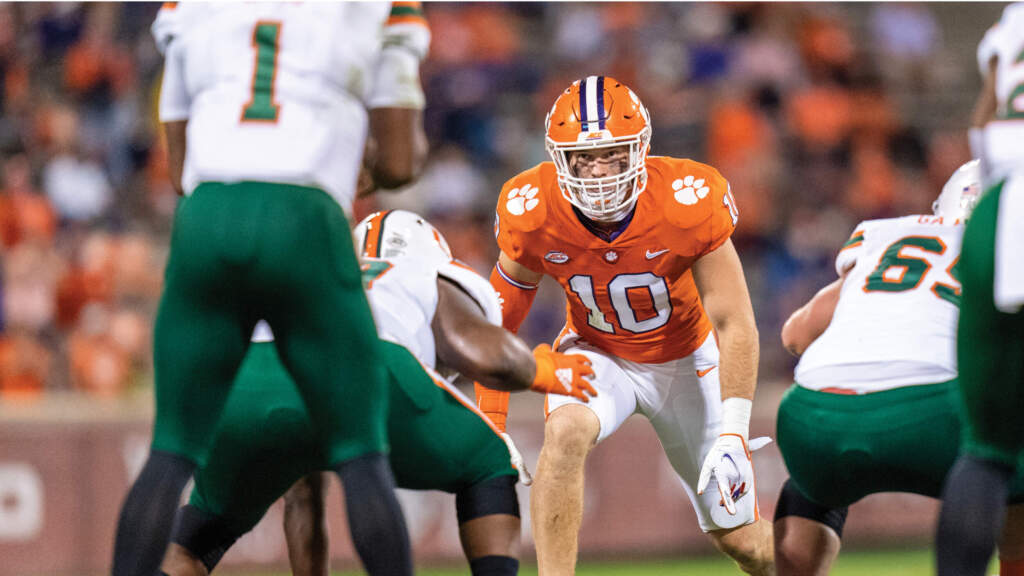