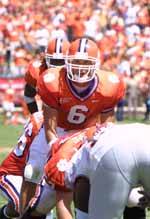 On Monday’s show, Hildreth profiles the familial sports lineage of Clemson’s starting quarterback, sophomore Charlie Whitehurst. As the son of David Whitehurst – former Furman University standout signal caller and seven-year NFL alum with the Green Bay Packers, Charlie is not the only talented athlete in his family. In fact, his sister – Carrie Whitehurst – joins the Tigers’ women’s basketball team this season as a freshman.

“ACC Flashback” spotlights Chris Weinke, Florida State’s 2000 Heisman trophy winner. Weinke – the ACC’s second-most prolific passer (9,839 total yards) and its most efficient (151.2 rating) – led the Seminoles to a national championship in ’99 (beat Virginia Tech in the Nokia Sugar Bowl) and three consecutive conference titles (’98-’00; co-champs with Georgia Tech in ’98). He was named conference player of the year in ’00, when he passed for 4,167 yards (347.3 ypg), and he was a four-year letterman. Weinke ended his career with a 32-3 record as a starter, and he is joined by fellow Heisman trophy winner Charlie Ward (’93) as the only FSU quarterbacks to have their jerseys retired (Weinke’s #16 in ’01; Ward’s #17 in ’94).

ACC LIVE’s “Hot Ticket” segment features a recap of Saturday’s ballyhooed showdown between No. 5 Florida State and No. 2 Miami. In this matchup of undefeated powerhouses (both 5-0), two of the top passers in the nation – Brock Berlin (UM) and Chris Rix (FSU) – go head-to-head in a game with national championship implications as well as bragging rights in the 47th meeting in this riveting intrastate rivalry.

ACC Players of the Week are spotlighted on Monday’s show, which also includes “Hog’s Hot List” – the host’s roundup of the latest intriguing tidbits from around the nine-member ACC family – and Hildreth’s “Speed Read,” which tackles the up-to-the-minute news, notes and happenings in the ACC.