In March 2019, Amari Rodgers tore his ACL. Typically, that particularly dreaded injury comes with a recovery time of 9-12 months. But the wide receiver was back on the field on Sept. 7, 2019 to help Clemson defeat No. 11 Texas A&M, just under six months after his surgery.

That quick of a recovery does not happen by chance. The Knoxville, Tenn. native had to pick himself up and get to work immediately in order to achieve his goal of returning in time for the Syracuse game, a goal he beat by a week.

“When it first happened, I was hurt emotionally, but I made sure I kept in mind what my parents taught me, which is to face adversity head on. I wanted to come back faster than anyone said I could.”

For that to happen, he would also have to work harder in recovery than anyone said he could. Any chance he got, he would work on his range of motion and do extra reps in the weight room. Eventually, the doctors gave him the all-clear to put the helmet back on and suit up in orange and purple.

“It felt amazing and it was such a relief to know that all the work that I put in paid off and I was able to get back out there and help my brothers get wins. It was a long process, but it was back to playtime, and I had to stay dedicated during the year to keep my knee healthy.”

Despite his summer being occupied almost exclusively by thoughts of his injury and his rehabilitation, once the games began, Rodgers put his knee out of his mind and tried to do everything he could to help the team, even though he knew he still was not quite at 100 percent.

Last season, Rodgers was lucky enough to be on a receiving corps that included Tee Higgins and Justyn Ross, and those two proved more than capable of handling a heavy workload. This season, with Higgins in the NFL and Ross sidelined with an injury of his own, Rodgers has had to pick up some of the slack.

Rodgers has emerged as one of Trevor Lawrence’s top options in the passing game, and he has not disappointed. It is an opportunity he was prepared for and excited to be taking advantage of.

“Coming into this year, I knew I was going to have a bigger role than any year before knowing that I’m a veteran now, so I had that expectation and I prepared in the offseason and kept my body healthy so I’d be ready to go when the time came.”

Not only has Rodgers’ role increased on the field, his status as a No. 1 receiver also comes with leadership responsibilities that he is happy to take on. An incredibly hard worker and student of the game, the senior is constantly finding ways to motivate his teammates to be the best players they can be.

“I’m someone who tries to lead by example. I’m not really a ‘rah-rah’ guy, but whenever I see something, I’ll pull someone to the side and coach them up a bit. I’m not the type to call someone out in front of everyone. I tell them on the side, because it’s more personal that way.”

One of the many ways Rodgers leads by example is after practice, where he can be found working on his hands on the JUGS football machine well after Head Coach Dabo Swinney has called the end of a session.

“Whenever I’m doing JUGS after practice, those reps improve my game and make me better. I’m not out there catching balls just for the heck of it. I’m visualizing a defensive back on me and catching it different ways. Whenever I’m working, I make it as real as possible.” 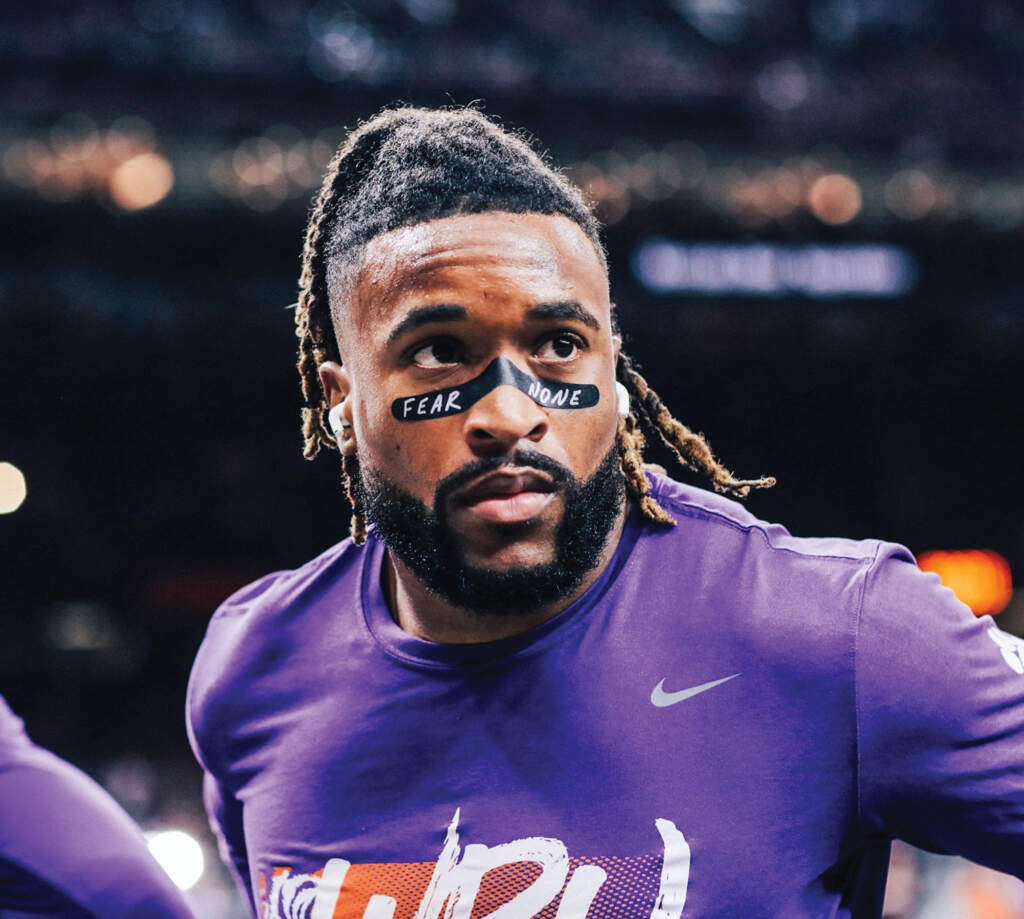 Rodgers has always gone the extra mile in his preparation, and the sound of his hands squeezing footballs flying at him while much of the rest of the team is already getting showered is a great testament to that and an inspiration for everyone to go above and beyond.

This innate coaching ability and tremendous work ethic Rodgers possesses runs in his blood. His father, Tee Martin, won a national championship at Tennessee as the starting quarterback and has since returned to Knoxville as an assistant coach.

Growing up with a football mind of that caliber helped Rodgers develop his love of the sport and become an intelligent player.

“Our relationship is great and definitely played a role in me becoming the player I am now. Him being a coach and in the game was an advantage for me. I watched film with him whenever I got the chance to, and he would coach me up, which definitely helped me grow.”

Rodgers’ aspirations when his playing days, which will hopefully include an NFL career, come to a close remain rooted in staying involved in football. He is determined to continue working in football, whether that be moving into the broadcasting side of the business or following his father’s footsteps and getting into coaching.

While he is still a player and not yet moving into other roles that make up the football world, Rodgers described himself as something of an on-the-field coach. However, his knowledge of the game and his skills at reading defenses did not come naturally…it was something he had to earn through many hours of practice.

Rodgers is clearly motivated to be the best he can at everything he does, and he is driven by his siblings, a twin sister and three younger brothers.

“My family is who I do it for. My brothers look up to me, and that’s why I do it, so I can be that figure for them who helps them see how it gets done right. That’s what drives me and that’s why I always feel the need to go above and beyond, on and off the field.”

His 16-year-old younger brother is a lefthanded quarterback as well as a talented baseball player and is already in his own process of figuring out the next steps in his athletic career. Rodgers advises him to do what is best for him no matter what and stay on the path that provides him the most happiness.

With every passing practice and game, Rodgers gives his family members, who he is so driven to play for, the privilege of watching their loved one do what he loves at the highest level possible, and in the process, works harder than anyone else to be the best player and man he can be.