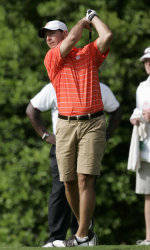 WHAT: The Chick-fil-A Bowl Challenge charity golf tournament will be televised nationally on ESPN2, featuring the nation’s top coaches and celebrity alumni from the ACC and SEC.

ABOUT: The nation’s premier head coach and celebrity golf event was held at the beautiful Reynolds Plantation resort on Lake Oconee outside Atlanta. Over the past five years, the Chick-fil-A Bowl Challenge has provided more than $2.5 million in scholarship and charity to its participating universities.

The event culminates with a made-for-TV round featuring university head coaches and celebrity alums competing for scholarship money for their schools.

This year’s Challenge contributed a record $638,000 in scholarship and charitable donations, including $70,000 to aid tornado victims in the state of Alabama.

The broadcast will also feature exclusive interviews with the participating coaches and highlights from the long drive and closest-to-the pin competitions that took place prior to the golf tournament.