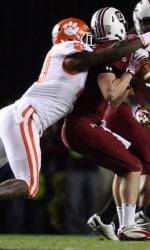 COLUMBIA, SC – Clemson got 66 rushing yards from Andre Ellington and a nine-yard touchdown pass from Tajh Boyd to Dwayne Allen, but it was not enough as 12th-ranked South Carolina beat No. 17 Clemson 34-13 Saturday night at Williams-Brice Stadium in Columbia.

“You have the highest of the highs and the lowest of the lows, that’s just the nature of this profession,” Clemson Head Coach Dabo Swinney said. “We just did not play well. It was really disappointing. We dropped touchdowns passes and we allowed too many sacks. Obviously, that affects your ability to score.

“Defensively, their quarterback beat us.”

The Gamecocks, who earned 10 wins for just the second time in school history, were led by quarterback Connor Shaw. The sophomore rushed for 107 yards and threw three touchdown passes as South Carolina defeated the Tigers for a third straight season.

Shaw threw touchdowns passes of 49, two and 18 yards to Bruce Ellington, Rory Anderson and Alshon Jeffery, respectively. He also finished the game 14-of-20 for 210 yards.

“He was the difference in the game, there was no doubt,” Swinney said. “That is the most disappointing thing to me coming out of this game, is that we let the quarterback beat us. We knew exactly what they were going to do, but we could not stop it.”

Clemson then tied things up after South Carolina failed to pick up a first down on its next possession. Gamecock punter Joey Scribner-Howard dropped the snap, and Clemson’s Drew Traylor blocked the punt, which Chad Diehl recovered at the South Carolina 26. A few plays later, Chandler Catanzaro kicked a 32-yard field goal to tie the game, 10-10, with 6:14 to play in the first half.

South Carolina’s Shaw answered the Clemson rally with a nine-play, 60-yard drive that took 4:19 off the clock. He capped it with a 15-yard run to give the Gamecocks a 17-10 lead with 1:55 to play before the break.

The Gamecocks (10-2) started the second half like the first. They shut down the Clemson offense on its first possession, and then Shaw led a five-play 66-yard drive which he finished with a two-yard pass to Anderson on third-and-goal. That gave South Carolina a 24-10 lead with 9:52 to play in the third.

Catanzaro added a 40-yard field goal early in the fourth quarter, but the Gamecocks got another field goal from Jay Wooten – he kicked one from 47 yards in the first quarter – and then Shaw threw his second touchdown pass of the night following a Clemson turnover to put the game away. The touchdown went for 18 yards.

South Carolina sacked Boyd five times and held the Tigers to a season-low 153 yards. Boyd finished the night with 83 yards on 11-of-29 passing.

“That is where I have to become wiser and more composed,” said Boyd about being sacked. “I just need to be more confident in my guys and not immediately run out of the pocket. We just need to work harder and get better.”

The Gamecocks finished with 420 total yards, including 210 on 53 carries.

Clemson will now turn its attention to next Saturday as it heads to Charlotte for the ACC Championship game. The Tigers will face No. 5 Virginia Tech, who beat Virginia Saturday to advance to the title game. That game is scheduled to kick off at 8:00 p.m. from Bank of America Stadium.

“We have a very good Virginia Tech team coming up, and we need to get ready to play,” Allen said.