Editor’s Note – This is the 125th season of Clemson football. To commemorate the first 125 years, Tim Bourret is writing articles this year on some of the most important moments in Tiger history. Below is the fifth installment of the series.

You can point to many key moments in the first six years of the Dabo Swinney era that have led to the unparalleled success of the last five years.

The 2011 season had many big moments. A 65-yard touchdown catch by Sammy Watkins from Tajh Boyd against Auburn signaled it would be a breakthrough year, as Clemson beat the defending national champion thanks to 624 total yards.

The conversion of a fourth-and-16 for the Tiger offense against Louisiana State in the 2012 Chick-fil-A Bowl stands out. The conversion led to 37-yard field goal by Chandler Catanzaro on the last play of the game in Clemson’s 25-24 victory over the No. 7 and SEC Tigers.

The Tigers won 10 of the first 11 games in 2012, but they were coming off a 27-17 loss to South Carolina, their fourth straight loss to the Gamecocks. Louisiana State was one of the most talented teams in the nation in 2012. Thirty-two players on that team went on to play in the NFL, including 19 defensive players.

While Clemson already had a 10-win season and top-20 ranking in the bag, this game against the SEC Tigers was an opportunity to move Clemson to the next level. They had finished 13-1 the previous year and played for the national championship against Alabama, and they had won the national title just five years prior to that.

Clemson controlled the tempo throughout and actually totaled 100 plays to just 48 for Louisiana State in the game. But Clemson had a few problems in the red zone and Louisiana State had a 24-13 lead entering the fourth quarter. 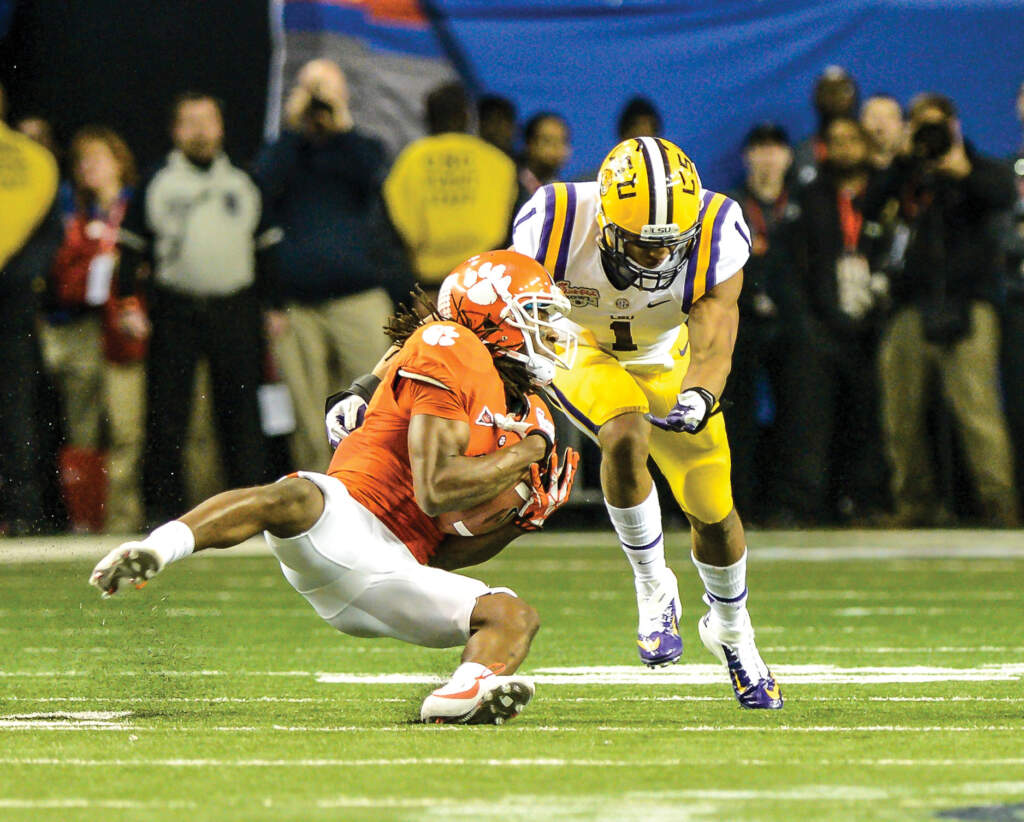 Clemson cut the lead to 24-16 thanks to a 26-yard field goal by Catanzaro with 9:26 left in the game. On the ensuing possession, the Clemson defense, which had been solid all night and held Louisiana State to just 219 total yards, recorded its sixth sack of the game, a combined effort by Grady Jarrett and Malliciah Goodman, future Atlanta Falcons who were playing in their future home stadium.

Boyd led Clemson on a 12-play, 77-yard drive and completed a touchdown pass to DeAndre Hopkins in the back of the endzone to make the score 24-22 with 2:47 left. Clemson went for two to tie the score, but the play failed.

On the first play of the ensuing drive, Louisiana State gained eight yards on first down. But for some unknown reason, the SEC Tigers threw two passes the next two plays. Had they made a first down, they could have run the clock out.

Clemson got the ball back with 1:39 left at its own 20. Clemson lost six yards over the first three downs and was faced with a fourth-and-16 at its own 14. With 1:22 left, the ball was snapped to Boyd, who hummed a 26-yard completion to Hopkins. The ball narrowly missed the helmet of a Louisiana State defender on its way to the waiting arms of Hopkins, who made a sliding reception at the Clemson 40.

Boyd continued to complete important passes to future NFL receivers Adam Humphries and Hopkins. Boyd was 5-5 passing to finish the drive with 60 yards. His final completion to Humphries set up Catanzaro’s 37-yard game-winner. When he made the kick, it was the first time Clemson led.

Clemson finished with a No. 9 ranking by USA Today and No. 11 ranking by AP. That victory over a talented team brought Clemson’s national brand to another level, one that is thriving today.