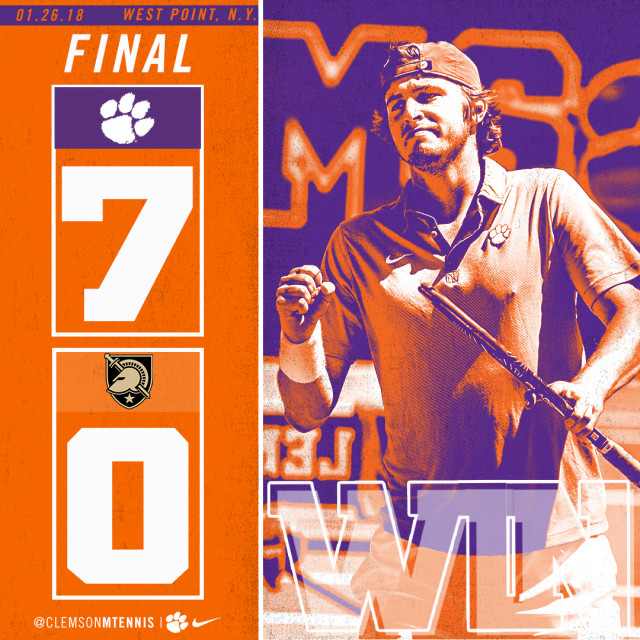 WEST POINT, N.Y. – The Clemson men’s tennis team defeated Army, 7-0 on Friday at Lichtenberg Tennis Center in West Point, N.Y. With the win, the Tigers improve to 2-1 on the season while the Black Knights drop to 0-4.

The Tigers claimed the doubles point, earning victories on all three courts. Senior Sam Edwards and freshman Yizhou Liu improved to 3-0 overall, earning their first win at No. 1 doubles (6-4). Sophomores Carlos Kelaidisand Marshal Dagostine earned their first victory of the season at No. 2 doubles (6-4).

The Tigers came out strong in singles, with Sam Edwards and Simon Baudrynearly clinching at the same time. Edwards was the first to clinch with a (6-0, 7-5) victory over Greg Shannon of Army West Point at No. 2. Baudry was not far behind when he clinched the point at No. 1 ­with a (6-3, 6-4) win against Mike Nguyen, giving Clemson a 3-0 lead.

– Simon Baudry, ranked 91st according to the final fall ITA Rankings, earned his first win of the season at No. 1 singles and improves to 3-0 overall.

– Yizhou Liu improve to 3-0 in doubles as a Tiger.

– Reed Rabideau picked up his first win of the season at No. 5 singles, in a third set tie-break that ended 16-14.

– The 7-0 clean sweep was the first for the Tigers this season.

– This was the first meeting between the two programs since 2006.

– With the win, Clemson continues to lead the series 4-0.

Up Next The Tigers are back in action tomorrow as the face Binghamton at Lichtenberg Tennis Center in West Point, N.Y. First serve will be at 1 p.m.