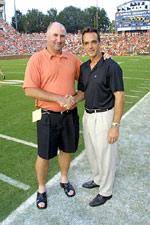 Eric Eichmann had a remarkable All-America career at Clemson, and had a major role in Clemson’s first national soccer title in 1984. He continued his fine career as an amateur and pro after his playing days were over and is still involved in the sport. The native of Florida was a freshman in 1983, and he immediately gained All-ACC honors that season. He was the Clemson Invitational Tournament MVP and helped the Tigers to a 16-3-2 overall record, including a #11 final national ranking.

As a sophomore, he earned Second-Team All-ACC honors and was a starter on the 1984 team that finished 22-4 and won the national championship. That team defeated the top four seeds in the NCAA Tournament to win the title, a first for any team in any sport in NCAA history. In 1985, Eichmann had a record-setting season with 19 assists, a Tiger mark that still stands today. He led the ACC in that category and helped the team to an ACC title, a Sweet 16 NCAA appearance and a #3 final national ranking. As a senior, he again earned All-American honors, led the team in assists (11), and helped the team to another top-20 final ranking. For his career, he played in 88 matches, still a Clemson record, and had 47 assists (also a Clemson mark that stands today), one more than Bruce Murray, who is also in the Clemson Hall of Fame. Off the field, he was named to the ACC Academic Honor roll twice.

Since his playing days concluded, Eichmann was named to the Soccer America College All-Decade team for his play in the 1980s, as well as being named to the ACC’s 50th Anniversary team. Today’s selection to the Clemson Hall of Fame adds to his list of accomplishments. His soccer career did not end after he concluded his playing days at Clemson. He turned pro and took his game overseas, where he played for Buerder Bremen of Germany (1987-88 season). After only one year overseas, he returned home to join the U.S. National team for the 1988 Olympics.

He played for the Fort Lauderdale Strikers from 1988-93, helping the team to an APSL title in 1989. Also in 1989, Eichmann was a starter on the U.S. National team and scored the game-winning goal against Guatemala in a World Cup qualifier.

Eichmann was a member of the Saint Louis Ambush in 1995, helping the team to the NPSL title. At the end of that season, Eichmann signed a contract with the Kansas City Wizards for the first year of Major League Soccer. He played two years for the Wizards before retiring from soccer in 1997. He gave up his cleats and shin guards and became a licensed soccer coach. He coached the Miami Fusion (2000 and 2001 seasons) of the MLS before the league folded the franchise. He now serves as director of player development of the Boca United F.C. Youth Club.

Eichmann loves his memories of Clemson. “It was the greatest time of my life. I am extremely honored to be inducted into Clemson’s Athletic Hall of Fame and am looking forward to coming back to see friends, teammates, and a great university.”