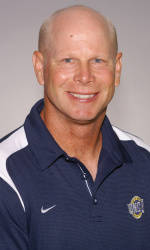 CLEMSON, SC – Eddie Radwanski has been named Head Women’s Soccer Coach at Clemson University. Athletic Director Dr. Terry Don Phillips made the announcement on Friday afternoon. Radwanski will take over the helm of the Tiger women’s program after spending 10 years as the head coach at the University of North Carolina at Greensboro.

“First of all, I am excited for the opportunity to join the Clemson family and community,” said Radwanski. “I am honored that Dr. Phillips would entrust me with taking over the women’s soccer program. I would like to thank Dr. Phillips and Kyle Young for their help during this process and for their faith and belief in me and my ability to lead this program. I look forward to the opportunity that presents itself in joining the premier women’s soccer conference in the country.

“I have invested a lot of my time, my career and my life at UNC Greensboro as both a student-athlete and a coach. It is a special place to me and it was going to take a very special place and situation for me to do something different. That is the way I feel about this opportunity at Clemson.”

Radwanski amassed a 140-65-13 record in 10 seasons at UNC Greensboro and the Spartans advanced to the NCAA tournament five times during his tenure. The Spartans, who concluded the 2010 season with a 19-2-1 record, were ranked 10th in the nation according to the final regular season poll released by the National Soccer Coaches Association of America on November 9. Radwanski was named Southeast Region Coach of the Year by the association on December 8.

The Spartans won the Southern Conference regular season and/or tournament championship eight of Radwanski’s 10 seasons, and the team earned the NSCAA Team Academic Award every year from 2001-2010. In his 10 years at UNC Greensboro, Radwanski coached 19 NSCAA Regional All-Americans, 46 All-Southern Conference selections, five SoCon Freshmen of the Year, five SoCon Players of the Year and four SoCon Tournament Most Valuable Players. He was a three-time SoCon Coach of the Year, in 2006, 2007 and 2008.

Radwanski`s women’s soccer coaching experience includes nine seasons (2002-2010) as coach of the 1994 Region III Olympic Development Program Team. In addition, Radwanski spent one season as the head coach of the Piedmont Spark, which won the 1999 W-League regular season national championship under his watch. He was also the head coach and coaching director for the Twisters Soccer Club of Greensboro for three years from 1996-1999.

Prior to coaching, Radwanski played four seasons at UNC Greensboro from 1981-1984 and was captain of the school’s NCAA Division III men’s soccer national championship teams in 1982 and 1983. Radwanski, a two-time All-American, was inducted into the UNC Greensboro Hall of Fame in 2000.

Radwanski played five seasons for the Carolina Dynamo from 1993-1998 and helped the team win U.S. Interregional Soccer League national titles in 1993 and 1994. He was named the USISL MVP and national finals MVP in 1993.

A member of the U.S. National Team Pool from 1985-92, Radwanski made five starts for the National Team in 1985. He also played with the World Cup, Olympic, World University and National Indoor teams in the 1980s and early 1990s.

Radwanski earned a Bachelor of Science degree in Business Administration from UNC Greensboro in 1997. He holds a United States Soccer Federation “A” coaching license, as well as an NSCAA Premier Diploma. Radwanski and his wife, Stephanie, have one daughter, Logan.

“We are excited about the future of Clemson’s women’s soccer under the leadership of Coach Radwanski,” said Phillips. “He brings a high level of energy and knowledge of soccer that I’m certain our team will feed off of. His track record in the game as a player and as a coach is indicative of his ability to lead teams to new heights and great accomplishments. We look forward to working with him as he leads our soccer program in the same manner.”