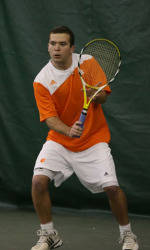 CLEMSON, SC – The Clemson men’s tennis team will play host to 19th-ranked Alabama Sunday at 1:00 p.m. at the Hoke Sloan Tennis Center on the Tigers’ campus.

Clemson is now 4-3 on the season. The Tigers are ranked 61st in the latest ITA poll. Alabama is now 5-1 this year. Alabama is ranked 19th nationally this week.

This will be the 15th meeting between Clemson and Alabama on the tennis courts. Alabama leads the overall series 10-4. The series began on April 1, 1941 with the Crimson Tide winning the inaugural match 5-2 that year in Tuscaloosa, AL.

After the Alabama match, the Tigers will play host to Navy, Dartmouth, Georgia Tech, Florida State, the College of Charleston, and Stetson over the next four weeks.