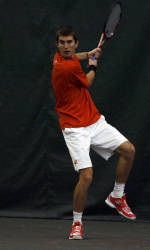 Clemson is 3-6 overall this season, and Georgia Tech is 5-6 overall and 0-1 in the ACC. The Yellow Jackets are ranked 68th according to the latest Intercollegiate Tennis Association (ITA) poll. This will be the ACC opener for the Tigers.

Yannick Maden leads the Tigers this season with an 18-4 record overall and a 7-1 mark in dual matches. Currently he is ranked 88th as a singles player according to the ITA poll.

This will be the 52nd meeting between Clemson and Georgia Tech on the tennis courts. Georgia Tech leads the overall series 26-25. The series began on April 25, 1925.