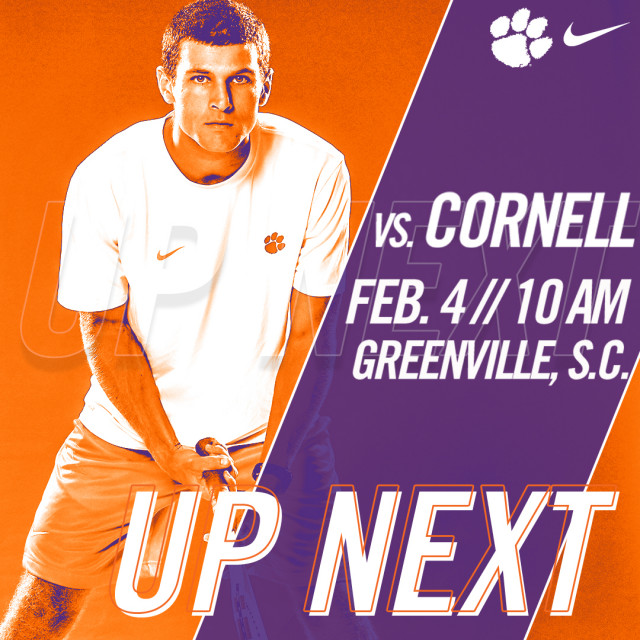 – Clemson traveled to West Point, N.Y. last weekend to face Army and Binghamton. The Tigers swept the Black Knights 7-0 on Friday and defeated the Bearcats 5-2 on Saturday.

– The Tigers opened the 2018 season on Jan. 13 with a win over Presbyterian College (6-1) at Furman’s Mickel Tennis Center in Greenville, S.C.

– Clemson’s 2018 roster is made up of two seniors, one junior, three sophomores and four freshmen.

– Two Tigers are ranked according to the final fall ITA singles rankings released on Nov. 15., 2017. Senior Alex Favrot is 47th and sophomore transfer Simon Baudry is 91st. The two teamed up and advanced to the Round of 16 at the Oracle ITA Fall National Championship.

– Senior Sam Edwards sophomore Marshall Dagostine are both 3-1 during dual matches this season. Edwards has split time at No. 2 and No. 3 singles while Dagostine rounds out the lineup at No. 6.

– Edwards and Liu have teamed up to form the Tigers’ No. 2 doubles team, and the two are 4-0 in dual matches this season.

– The Big Red are coming off a 4-2 loss against Ole Miss on Friday after opening the season with a 6-1 victory over Wichita State on Jan. 25.

– David Volfson, Evan Bynoe and Joseph McAllister are three of Cornell’s top players according to the ITA rankings.