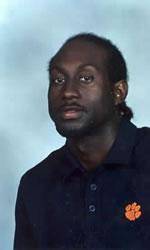 The match started with Wake Forest gaining a victory at number three doubles as Andrew Simpson and Todd Paul defeated Ryan Young and Brett Twente 8-6. Clemson evened the doubles action as Nathan Thompson and Jarmaine Jenkins 9-8 (5) at number one doubles.

Wake Forest quickly took a 2-0 victory as Ross defeated Damiisa Robinson was then able to clinch the win for the Tigers as he topped the 117th-ranked Hamar to give Clemson its fourth straight win.

“This was another big win for our program,” said head coach Chuck Kriese. “We have always known that we were a good team, and now we know that we are a clutch team. We came up big in some close matches, and have some momentum for the end of the season.”

With the win, Clemson improves to 20-10 overall, and evens its Atlantic Coast Conference record at 4-4. The Tigers return to action on Saturday when it plays host to future ACC member Miami at noon at Hoke Sloan Tennis Center.