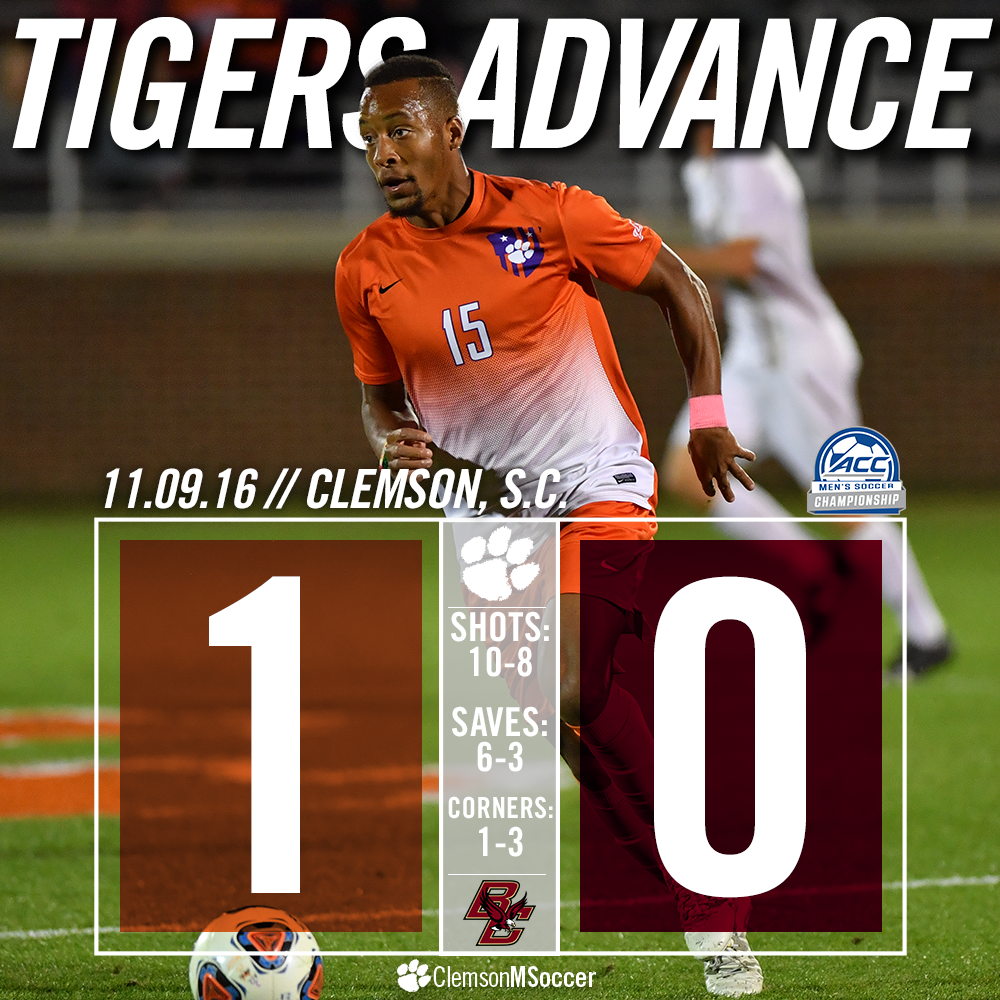 CLEMSON, S.C. – The third-ranked Clemson men’s soccer team advances to the ACC Championship after a game-winning goal in the 88th-minute by senior Alex Happi to lift the Tigers over Boston College on Wednesday night, 1-0. The Tigers improve to (12-2-5) and travel to Charleson, S.C. on Sunday to play for their 15th ACC Championship.

After 15 minutes and both sides settling into the match, Clemson began to control the possession and put pressure on the back line of Boston College. In the 20th-minute junior Diego Campos had a breakaway opportunity that was halted by the Boston College goalkeeper to keep the score level. With three minutes remaining in the half Clemson was awarded a penalty. Campos would step up to the spot, but the Eagles goalkeeper was able to make the save, and the two sides would head into the break scoreless.

Through 20 minutes of the second half, Clemson and Boston College traded scoring opportunities, but the match would remain scoreless. The best chance of the half for the Tigers came with eight minutes remaining after a dangerous ball into the box by senior Aaron Jones caused a scramble, but a shot by Campos ultimately went wide. With just one minute remaining, senior Alex Happi rose above the defense to flick the ball played in by Jones from a free kick into the back of the net for his first goal of the season to send the Tigers to the ACC title match on Sunday.

In the match, Clemson took a total of eight shots and Boston College took nine shots. Sophomore Ximo Miralles recorded six saves and moves to 10-1-5 overall and fifth all-time for single season shutouts as a Tiger.

The Clemson men’s soccer team returns to action in the ACC finals on Sunday, Nov. 13 at 2:00 p.m. in Charleston at the MUSC Health Stadium. The Tigers face the regular season ACC Champions and the No. 1 overall seed in the tournament, Wake Forest.