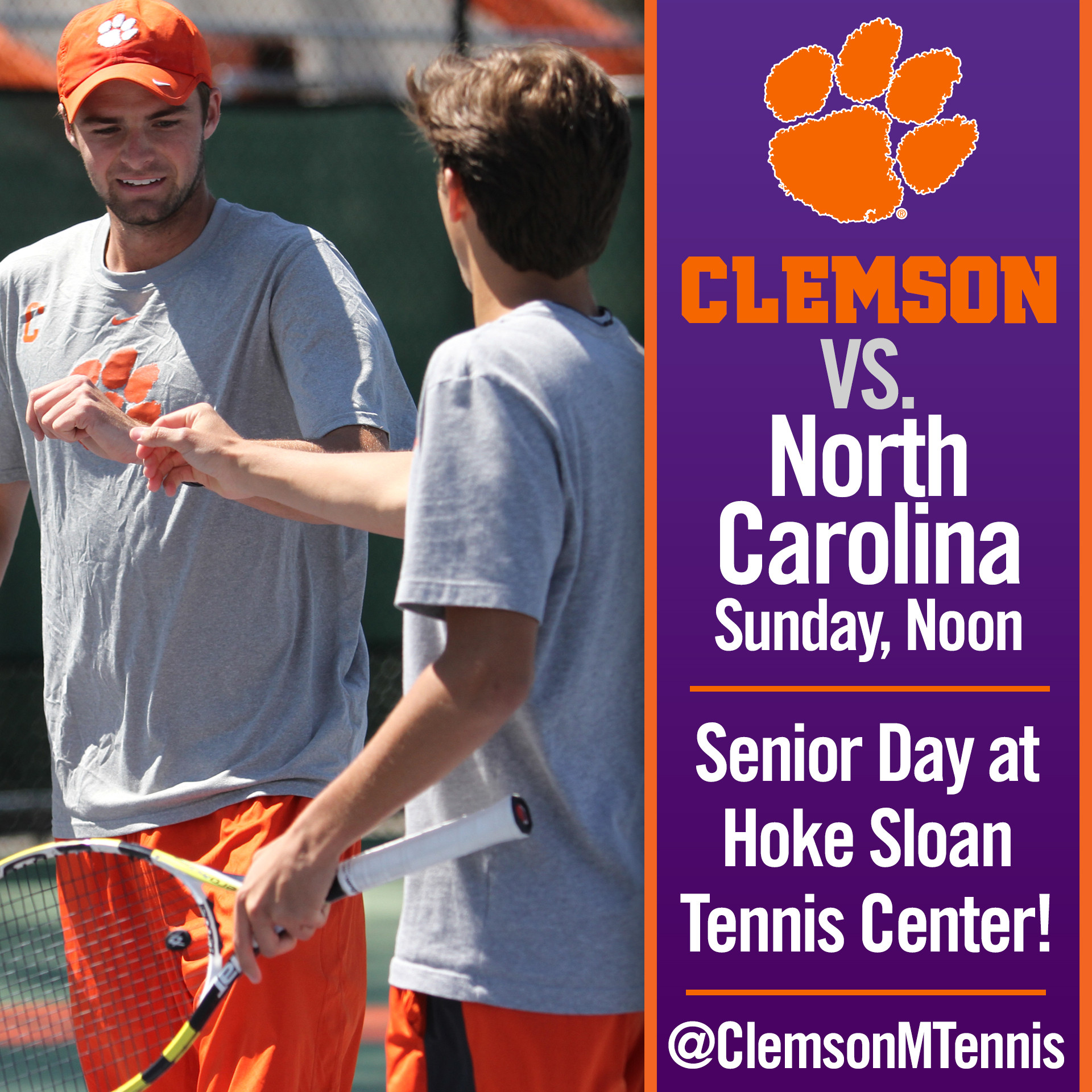 CLEMSON, S.C. – The Clemson men’s tennis team hosts No. 15 North Carolina on Sunday at noon at Hoke Sloan Tennis Center. The match is the final regular season match for the Tigers, so senior captains Hunter Harrington and Alejandro Augusto will be recognized prior to the match. Live scoring will be available and updates via Twitter @ClemsonMTennis will be posted throughout the afternoon.

The Tigers are 11-14 overall and 2-9 in ACC play on the season. Clemson is coming off a tough 4-3 victory at Boston College last Sunday in which the Tigers rallied after losing the doubles point. Freshman Hampton Drake won his fourth consecutive singles match last Sunday, rolling to a 6-1, 6-0 win over his Boston College opponent at No. 4 singles. Sophomore Daffra Sanon, a transfer from the University of Washington, clinched the match for Clemson with a three-set win at No. 3 singles. Clemson’s top doubles duo of Harrington and Augusto is ranked 59th nationally in this week’s ITA rankings.

The Tar Heels are 18-9 overall and 7-4 in ACC play on the season. Yesterday, they traveled to Georgia Tech, knocking off the Yellow Jackets 5-2. North Carolina won the doubles point in part thanks to the return of Brayden Schnur, who saw his first action in doubles play since Feb. 28.

Clemson’s top doubles duo of Harrington and Augusto knocked off North Carolina’s duo of Clark and Schnur in the semifinal of the ITA Carolina Regionals back on Oct. 20, 2014. The Tar Heel team was ranked No. 1 in the nation at the time. Harrington and Augusto lost the first set, but rallied to win the second 7-6 and won the tiebreak to advance to the final, where the Clemson team would eventually fall.

Clemson trails in the overall series with North Carolina 27-49. The Tigers are, however, better at home against the Tar Heels, winning 15 of 29 matches all-time. Most recently, the two teams met in Chapel Hill last season, a 6-1 North Carolina win on April 13.