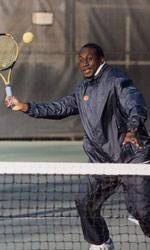 Belton, SC – The 24th-ranked South Carolina Gamecocks won the doubles point and all six singles matches to defeat Clemson 7-0 in men’s tennis action on Tuesday afternoon in Belton, SC. The Gamecocks improve to 15-7 on the year while Clemson falls to 11-17.

The Gamecocks got off to a strong start in the match against the Tigers as they won two out of the three doubles matches. Clemson’s duo of Goran Sterijovski and Damiisa Robinson did however win at No. 2 doubles over South Carolina’s Seth Rose and Marcus Wermee. With the win, the Robinson and Sterijovksi improved their doubles record to 14-6 on the year. The Gamecocks then clinched the match by winning all six singles matches against the Tigers.

On Friday, Clemson will face 22nd-ranked Wake Forest at 3:00PM in the first round of the ACC Tournament in Raleigh, NC. The Tigers will enter this year’s tournament as the No. 6 seed. The winner of Friday’s match between Clemson and Wake Forest will play on Saturday at 1:00PM. Last year as the No. 7 seed, the Tigers won three straight matches and advanced to the championship match of the ACC Tournament.