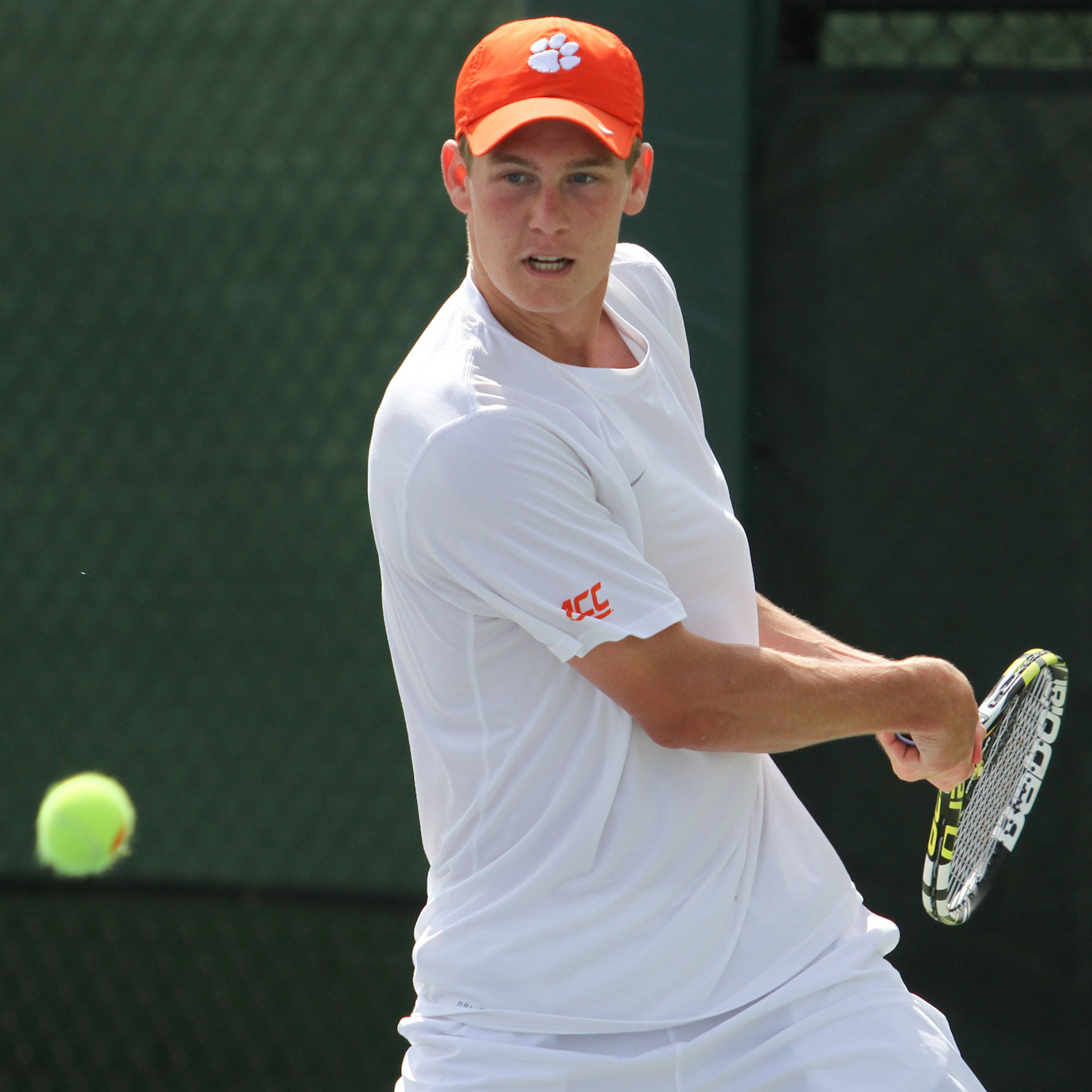 SOUTH BEND, Ind. – The Clemson men’s tennis team’s rally fell just short at Notre Dame Friday afternoon. The Irish won 4-3 after clinching the doubles point and winning on singles courts four, one and three, in that order. The loss drops Clemson to 10-14 on the season and 1-9 in ACC play. Clemson’s last five losses have come to teams currently in the top 38 in the ITA’s weekly rankings.

Notre Dame won at No. 1 and 3 doubles to earn the first point of the match. Clemson’s duo of Hunter Harrington and Alejandro Augusto, ranked 58th this week, played a close contest, but fell 8-5 to Notre Dame’s team of Alex Lawson and Billy Pecor, ranked 12th nationally. At No. 2 doubles, Clemson’s Luke Johnson and Robert Dudley played tough against Notre Dame’s Eddy Covalschi and Josh Hagar, ranked 27th in the nation, and were trailing 5-7 when play concluded.

“Give credit to a very good Notre Dame team, and the way they competed,” said Head Coach Chuck McCuen. “Their energy is always at a high level, and at the end of the day, that makes a difference. It can be like having a seventh man out there.”

In singles, Clemson got off to strong start. Of the first three matches to finish, two were won by Clemson players in two sets. Freshman Hampton Drake rolled through Notre Dame’s Kenneth Sabacinski at No. 6 singles 6-0, 6-2. The win was Drake’s third in a row, as he swept through his competition last weekend as well. Sophomore Daffra Sanon picked up a straight-set win at No. 5 singles as well, beating Notre Dame’s Eric Schnurrenberger 6-2, 6-4.

“We did take a step forward today against an accomplished team on the road. It was a step in terms of building our confidence and knowing the next right thing to do. We are also starting to realize when match point occurs, and that it’s not always the last point played. The young players, especially, are finally starting to sense that.

“We have to continue to work on eliminating what I call ‘white noise’. It’s the chatter of the opposing team or crowd and it can affect your play, but the great players and great teams don’t let that noise frustrate them.”

Senior captain Alejandro Augusto picked up gritty win at No. 2 singles 7-5, 6-4 over Notre Dame’s Covalschi to keep Clemson’s chances alive. Augusto has played four of his last five matches against ranked singles players. Fellow senior captain Hunter Harrington put up a fight against Notre Dame’s Quentin Monaghan, who was ranked 10th in the nation, but ultimately fell 4-6, 5-7 at No. 1 singles. Luke Johnson rallied after losing the first set at No. 3 singles and won the second set 6-1, but fell in the third set.

“We’re not going away. We’re excited to head to Boston tomorrow and already have some things we plan to work on when we get to the courts.”

Clemson’s northern road trip continues on Sunday when the Tigers head to Boston College. Depending on weather and scheduling, Clemson and the Eagles will play either indoors or outdoors. If inside, the match will begin at 5 p.m. If outdoors, first serve will be at 1 p.m. Check @ClemsonMTennis on Twitter for further details. 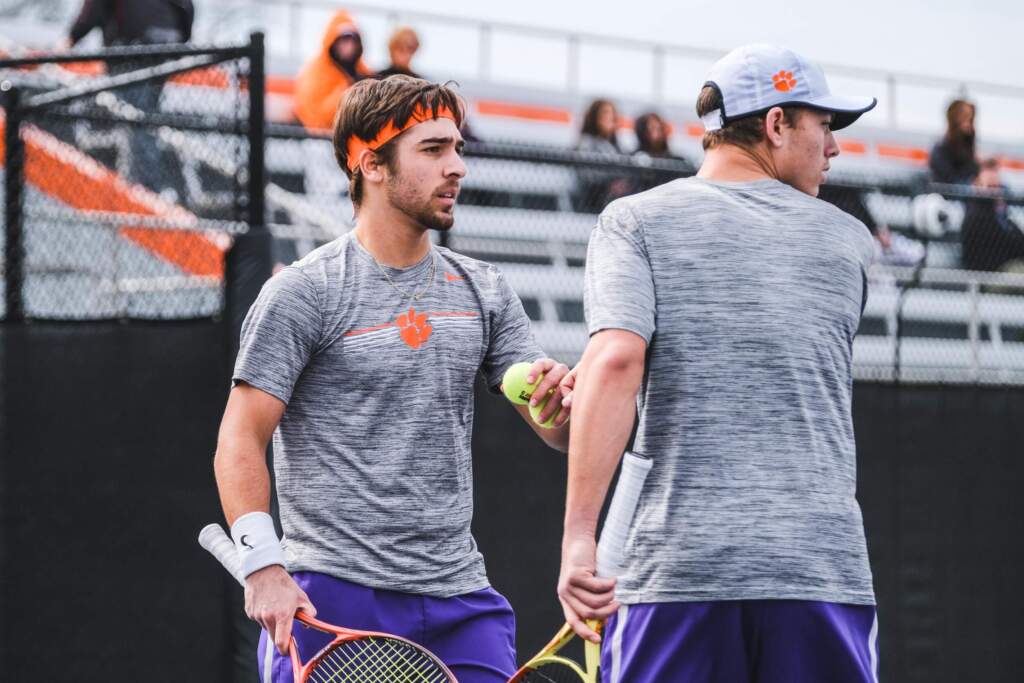 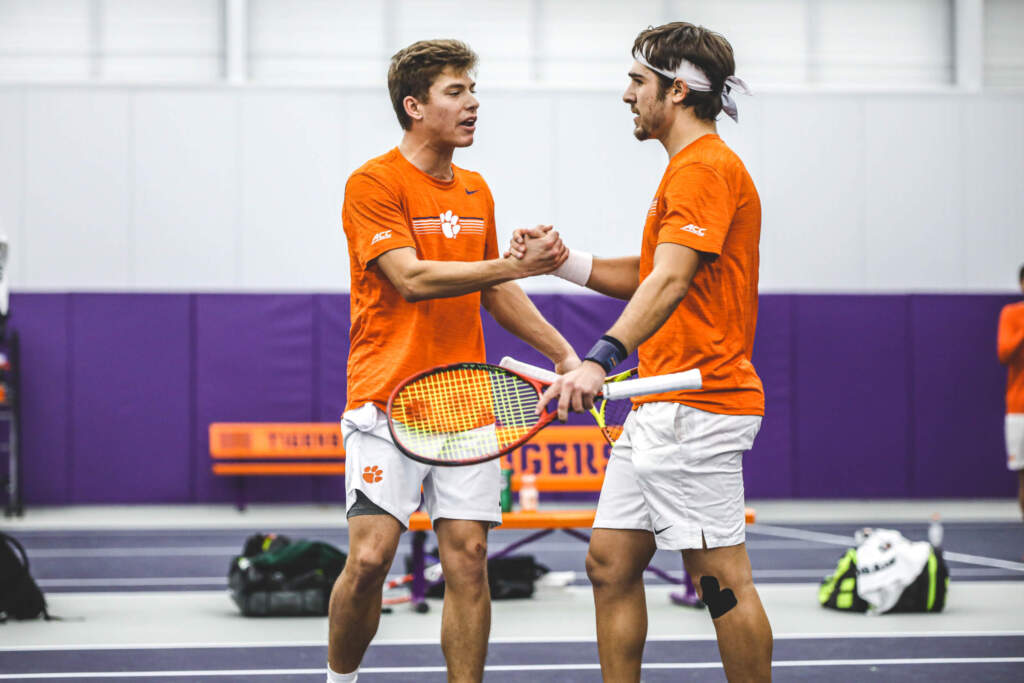 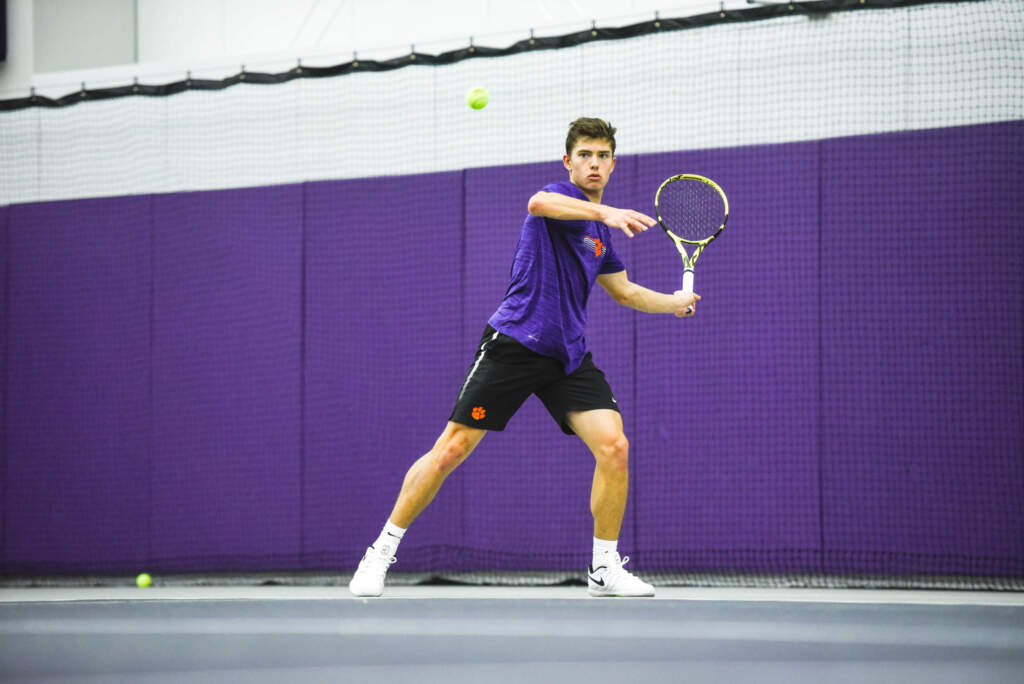 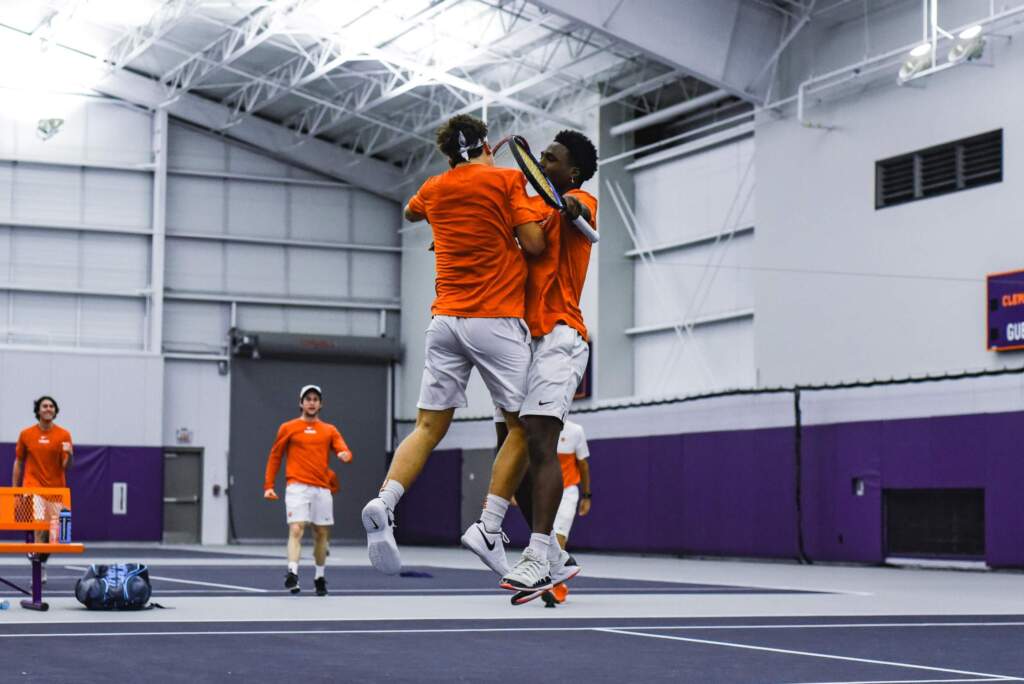