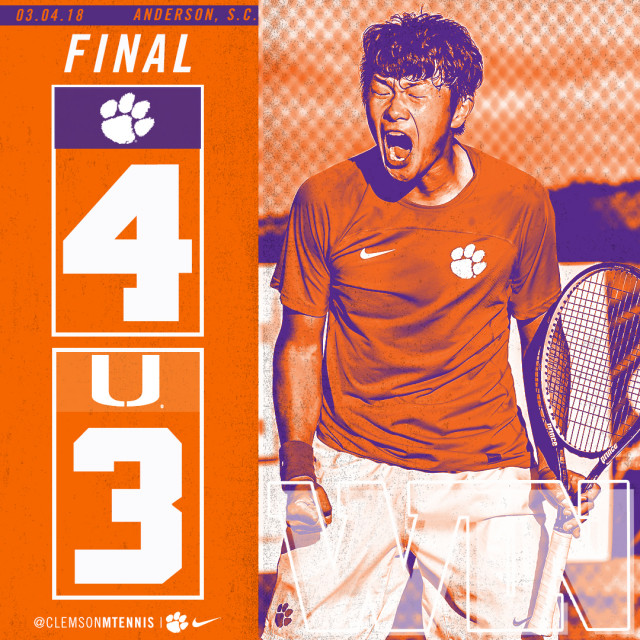 Clemson took care of business in doubles with victories on courts one and three to clinch the doubles point. The French duo of Alex Favrot and Simon Baudry were the first to finish (6-2) followed by Carlos Kelaidis and Marshall Dagostine (6-4).

Simon Baudry and Carlos Kelaidis both had a one set lead after winning each of their first sets 7-5, 6-2, respectively. After an early deficit in the second set, Kelaidis battled back and won the match point with a set scores of 6-2, 7-6 (4). Seconds later Baudry clinched the match for Clemson with a 7-5, 6-3 win at No. 2.

– Liu picked up his first win of the season at No. 4 singles.

– Second consecutive season that Clemson has defeated Miami by a score of 4-3.

The Tigers will return to action Sunday, Mar. 18 as they travel to Greenville, S.C. to take on Furman. The match is set for a 3 p.m. start.

Head Coach John Boetsch Quotes
“Proud of the team for how they bounced back against a tough Miami team. Miami is much improved, and it took everyone competing at a high level to get it done today. We have a group of selfless guys who are putting the team first and stepping up at big moments. I want to thank all our fans that come out to AU today. It was a great atmosphere.”