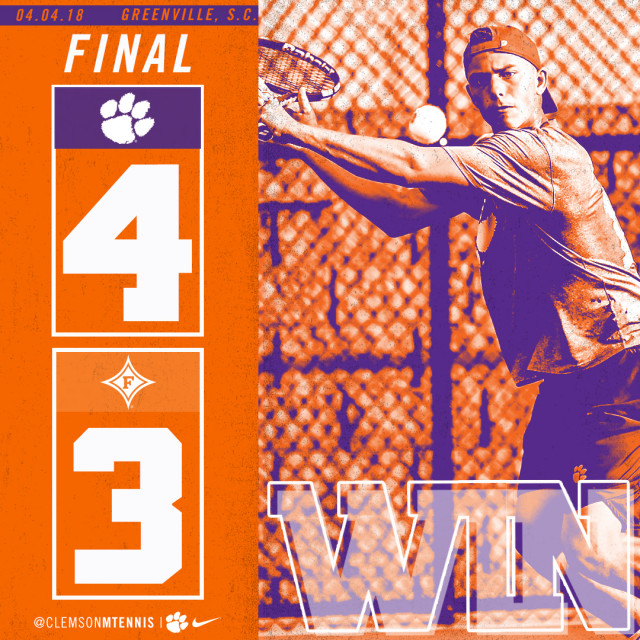 CLEMSON, S.C. – The Clemson men’s tennis team defeated Furman 4-3 in a hard-fought battle on Wednesday at the Mickel Tennis Center in Greenville, S.C. With the win, the Tigers improved to 9-6 overall, while the Paladins slip to 15-6.

Clemson took care of business in doubles, with victories on courts two and three, to clinch the doubles point. The sophomore duo of Carlos Kelaidisand Marshall Dagostine were the first to finish at No. 3 doubles, defeating the Paladins 6-4. Sam Edwards and Yizhou Liu clinched the doubles point for the Tigers, winning the tie-break 7-6 (2).

Kelaidis jumped out to an early one set lead, taking the first set 6-3. Furman’s Bhangdia took the second set at 6-4 and carried that momentum into set three, jumping out to an early 3-0 lead. With the match point on the line, Kelaidis battled back and clinched the match with 7-5 victory at No. 5.

INSIDE THE BOX SCORE

The Tigers return to ACC action Friday, April 6 as they travel to Winston-Salem, N.C. to take on the No. 1 team in the country, Wake Forest. The match is set for a 4 p.m. start.