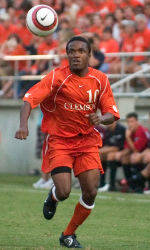 CLEMSON, SC-Dane Richards scored one goal and had one assist in leading 17th-ranked Clemson to a 2-1 win over Gardner-Webb in a men’s intercollegiate soccer match at Clemson, SC Tuesday night.

Clemson scored at the 13:22 mark. Dane Richards sent a diagonal pass from the right to Hector Quintanar who sent a 14-yard shot into the net for his first goal of the season.

Richards scored for Clemson at the 81:45 mark. Charlie Roberts served the ball to Richards who sent a 10-yard shot into the nets for his third goal of the season.

Gardner Webb scored with 7:04 left in the game. On a reset, Jarrett Jackson sent the ball to Giampi Lapeschi who scored from 24-yards out for his third goal of the season.

“I felt like we dominated the game and missed chances in tonight’s game,” said Clemson Head Coach Trevor Adair. “Alan O’Hara played tough in the back. Justin Moore and Brad Gibson played hard as usual. We were carried with only five or six players tonight. I am disappointed in the way we played as a team. I am disappointed in the way we managed this game and missed so many chances.”