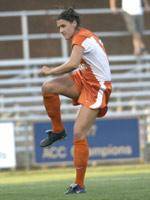 CLEMSON, SC-Courtney Foster scored two goals and was named the tournament’s offensive MVP in leading 19th-ranked Clemson to a 4-0 win over Alabama-Birmingham in the fourth and final match of the Clemson Women’s Soccer Invitational at Clemson, SC Sunday afternoon. Clemson is ranked 19th according to the Soccer America poll and 20th by the NSCAA. The Lady Tigers improve to 3-1 overall, while the Blazers fall to 2-2 this season. In the first half, Courtney Foster scored at the 21:46 mark with an assist by Paige Ledford. Ledford crossed the ball to Foster who headed the ball into the right wall of the goal from six yards out. The Lady Tigers took a 2-0 advantage with two seconds remaining in the first half as Allison Graham scored her third goal of the season. Graham worked the ball to the right corner of the box and slipped. She regained the ball and sent a diagonal shot into the goal. Clemson scored its third goal of the match at the 50:59 point. Kate Clifton sent a pass from the midfield to Foster. Foster ran the ball down and sent a shot from 12 yards out for her third goal of the season. Paige Ledford scored her first goal of the year at the 82:04 mark. Allison Graham sent a pass to Ledford who sent a shot into the goal from six yards out. “I was happy with our team’s mental focus and how they were mentally prepared for today’s match,” said Clemson Head Coach Todd Bramble. “Our freshmen continue to work hard and impress us. Courtney Foster has a knack for scoring goals. We feel that our freshmen have a bright future in our program. We came out motivated today and that is a good sign for our team after a hard-fought loss last Friday night.”