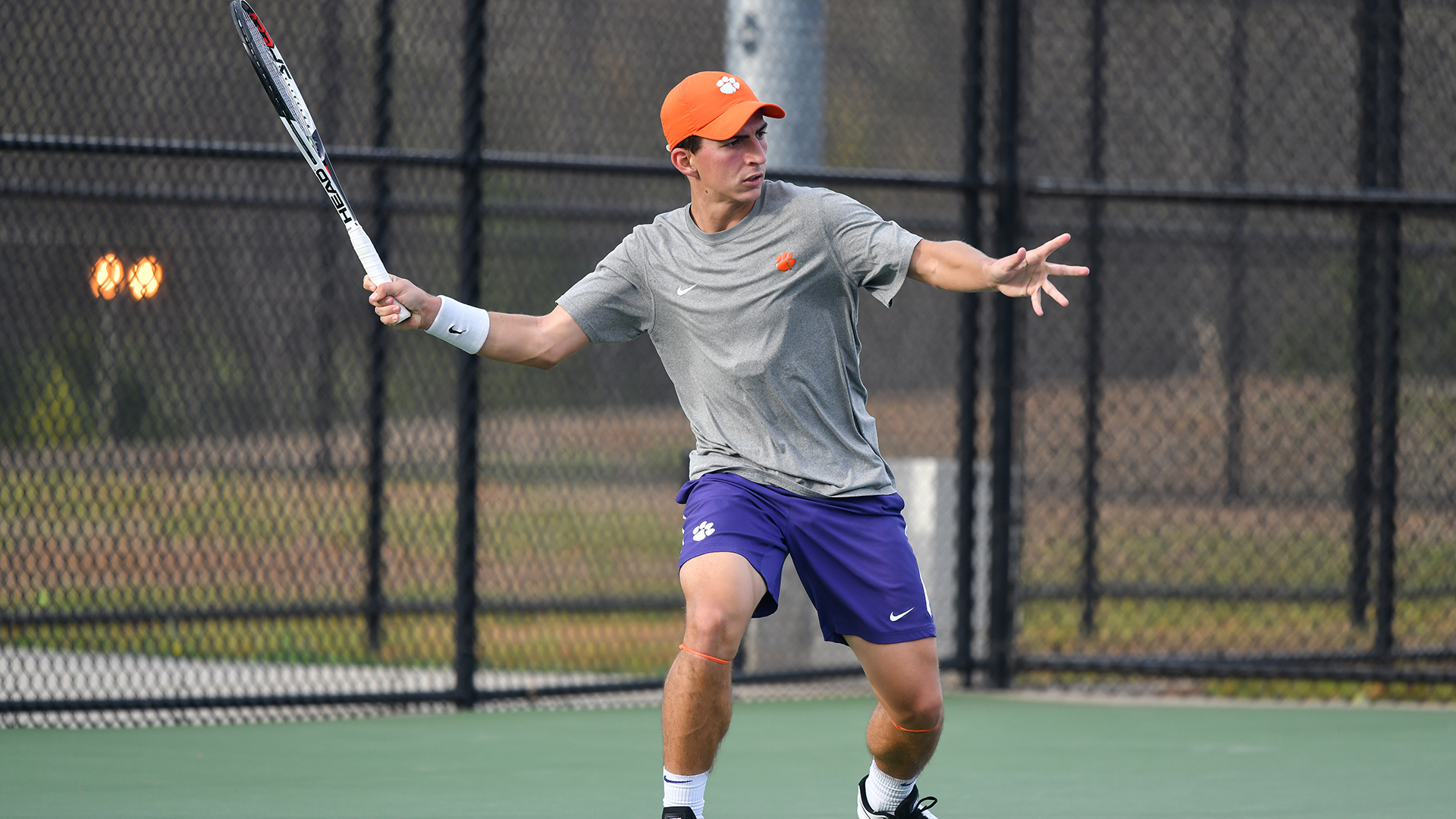 Reed Rabideau defied the odds to earn a spot on the tennis team.

For most athletes, the recruiting process begins in high school. During this time,
college coaches are able to evaluate and identify players before offering them the
opportunity to continue playing at a higher level.

For Reed Rabideau of the men’s tennis team, things went a little bit differently.
He may not have been a high-school standout, but Rabideau’s determination and
perseverance led to the opportunity of a lifetime.

“In high school, I played tennis,” said Rabideau. “I was decent, but I was never
extremely good. From what I’ve learned now, I missed so many things that I should
have been doing in order to get recruited. I barely played USTA tournaments.”

Growing up in West Palm Beach, Fla., Rabideau enjoyed playing tennis for fun,
but it was only after deciding to attend Clemson when he made the decision that he
wanted to compete at the highest level possible. With a lack of knowledge about the
recruiting process, he took matters into his own hands.

“I knew before I came to college that I wanted to play college tennis, but I didn’t
know how to do it. When I knew I was coming to Clemson, I started sending emails to
the coaches asking, ‘When are tryouts?’ but I didn’t know that they didn’t hold tryouts. I
didn’t know anything.”

But the lack of possibility never deterred Rabideau from his goal. As a freshman,
he joined the Clemson Club tennis team, where he spent three years competing,
practicing and serving as president. Before and after club practices, he also began a
rigorous workout program to improve his game.

“I never played as much tennis as when I got to Clemson. I was waking up at
5:30 every morning to go out before my 8 a.m., classes. On Mondays and Fridays, I
would do footwork drills, Wednesdays I would go for a run and Tuesdays and Thursdays
I would lift to get in some extra work.”

It wasn’t until the second semester of his junior year at Clemson that Rabideau
was finally called up to the big leagues. After “a strange series of events,” as Rabideau
called it, the Clemson tennis coaches contacted two players and offered them the
chance to compete in a closed five-day tryout.

“It was a five-day tryout with three tennis matches and two days of running,” he
explained. “The first two days were tennis matches, and I lost the first one in three sets.
It was a very good match. I played well, but the other guy played a little better.”

After the first day, things continued to take a turn for the worse. The morning of
the second day of the tryout, Rabideau woke up with a new set of worries.

“I was extremely sick. I tried to alleviate what I was feeling, but when it came time
to play the match in the afternoon, I lost 4-2 and I was puking on both sides of the
court.”

Despite this major setback, Rabideau’s confidence never wavered. He went on to
not only win the third day, but also set a personal best in the five-kilometer race. On day
four, he powered through sprints in order to even the score at 2-2 and pave the way for
a tiebreaking match early on Friday morning.

Rabideau toughed out the first set to win 6-4, but he was still not feeling his best.
As the match went on, he had lost the second set 6-2 and was down 4-1 in the third set.
Just eight points a way from losing, Rabideau turned to an unlikely source for
motivation.

“Every changeover, I’d look in the notebook and try to get more motivation. Down
4-1 in the third set, I made the decision that this is what I wanted. I’d been working really
hard for the past three years to try to get this and this was my one opportunity.”

Whether it was the notebook, the nonstop training or the goal he had set for
himself, finding the drive to win that match was crucial to his success. In spite of the
odds, Rabideau came back to win the set 6-4, and with that, he also won a spot on the
varsity squad.

With his triumph, however, came a new set of pressures and responsibilities
beyond his wildest dreams. With his newfound position on Clemson’s campus,
Rabideau still had to make the difficult transition between regular student and varsity
athlete.

“I had no idea what I was getting into. I don’t think anyone really does until you’re
actually experiencing what a D1 athlete goes through. You don’t really know what
happens between the time commitment, the travel days, the weekends that you give up
and the spring breaks that you don’t really have.”

However, Rabideau is clearly well-equipped with the work ethic needed to keep
up and said he would not trade the experience for anything in the world. He also pointed
out that there is a tradeoff. While it has been harder to handle academics, a social life
and his responsibilities on the team, he is grateful to be able to do what he loves every
day.

Before he had set foot on Clemson’s campus, Rabideau made the decision that
he wanted to play college tennis. His uphill battle with this decision exemplifies the idea
that it is never too late to do anything if you are willing to put the work in.

“The only thing that was working in my favor was that I was willing to put in more
work than anyone else.”