In doubles play, Spencer Whitaker and Ryuhei Azuma remained undefeated, earning the victory on line one 7-5 to advance to 5-0 as a pair. However, losses on Courts 1 and 3 ultimately cost the Tigers the doubles point.

Jorge Plans Gonzalez earned his second consecutive singles victory by a score of 6-4, 6-4 on court 5. Whitaker and Jacob Jahn were in the third set of their matches after winning both of their respective first sets when the Yellow Jackets clinched the win.

The Tigers return to The Duckworth Family Tennis Facility when they host Mercer on Sunday at 1 p.m. 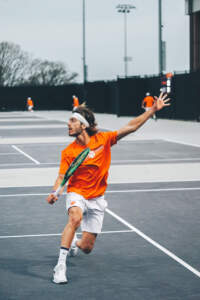