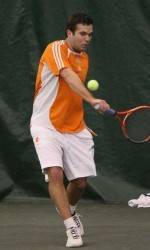 Wake Forest improves to 8-5 overall and 2-1 in the ACC. Clemson falls to 15-4 overall and, 1-3 in league play. Wake Forest is ranked 26th nationally in the latest ITA poll. The Tigers are ranked 33rd and have been ranked as high as 29th this season.

The Tigers are still without the services of senior and #2 singles player Rok Bizjak who is still recovering from a foot injury. He is expected back in the lineup in the next few days.

Wake Forest took the team’s doubles point winning all three matches. After the doubles, the match was moved indoors due to rain in the Winston-Salem area.

In singles, Steve Forman of Wake Forest defeated Carlos Alvarez of Clemson 6-3, 6-3 at the number one position. The Deacons’ Tripper Carleton defeated Kevin Galloway 6-1, 6-4 at number two singles. This was only the third loss for Galloway in dual matches this year. This season he has a 20-8 record in singles and a 16-3 mark in dual matches. He leads the Tigers in both categories.

“We have to give all the credit to Wake Forest today,” said Clemson Head Coach Chuck McCuen. “They are a tough team and are well-coached. We have a big week ahead and our team’s character will be tested.”

Clemson will play at Georgia Tech on Wednesday, March 31, at will play host to Boston College and Maryland this weekend in ACC matches.