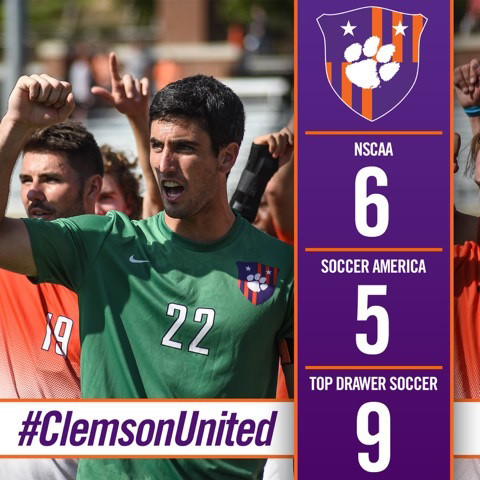 CLEMSON, S.C. – With its three wins last week, the Clemson men’s soccer team improved to 6-1-1 overall and moved into the top 10 in all four national polls. The Tigers improved from sixth to third in the HeroSports.com poll, their highest ranking of the four. The team maintained a No. 5 ranking in the Soccer America poll, jumped three spots this week in the NSCAA poll, from No. 9 to No. 6, and is ranked ninth according to TopDrawerSoccer.com.

Clemson is one of three teams from the Atlantic Coast Conference in the top five of the Soccer America rankings, as North Carolina is second and Virginia is fourth. The Tar Heels and Cavaliers are also ranked second and fourth, respectively, by the NSCAA and second and third, respectively, by TopDrawerSoccer.com. Creighton stands atop all four polls, at 6-0-0. The Blue Jays and Tar Heels are listed ahead of the Tigers according to HeroSports.com.

Last week, the Tigers defeated Furman (3-0), #16 Duke (2-1) and #21 Brown (3-1) on Tuesday, Friday and Sunday, respectively. Senior T.J. Casner was named the ACC Co-Offensive Player of the Week after scoring three goals in the three contests.

The Tigers’ next two matches are on the road in the state of North Carolina, as they travel to Winston-Salem to take on Wake Forest on Saturday, Sept. 26 and to Boiling Springs to play Gardner-Webb on Tuesday, Sept. 29.