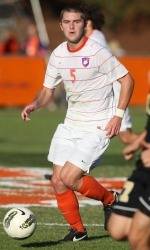 GREENSBORO, NC – ­Three Clemson Men’s Soccer players have been named to the 2011 All-ACC Academic Team, as announced by Commissioner John Swofford. The three Clemson players that were recognized for their academic achievements include Brynjar Benediktsson, Cody Mizell and Austin Savage.

To be eligible for All-ACC Academic Team consideration, a student-athlete must have earned a 3.00 grade point average for the previous semester and maintained a 3.00 cumulative average during his academic career.

Benediktsson, a pre-business major, was named to the National Soccer Coaches Association of America (NSCAA) All-South third team in 2011. He led the Tigers in scoring with seven goals and five assists for 19 points. He is the first freshman to lead the Tigers in scoring since Jimmy Glenn in 1990. Only four other freshmen have led Clemson in scoring in the program’s storied history.

Cody Mizell, the Tigers’ goalkeeper had 76 saves last year and a 1.29 goals allowed average. Just a sophomore, he is already is tied for 10th on the Clemson career list for most saves with 140. Mizell is a communications major.

Austin Savage is making his second appearance on this team. The parks, recreation and tourism management major was the Tigers’ second leading scorer in 2011 with six goals and four assists for 16 points.