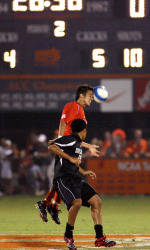 Clemson, SC-Freshman forward Blake Brettschneider made his first match as a South Carolina soccer player memorable as he scored with just 1:27 left in the second overtime period to lead the Gamecocks to a 1-0 men’s soccer victory over Clemson Friday night at Riggs Field. It was the season opening match for both teams.

The match was played in front of a crowd of 6,337 at Riggs Field, the sixth largest crowd in Clemson history.

Brettschneider took a lead pass from midfielder David Smith, just a few yards in front of Clemson goal keeper Joseph Bendick and flicked the ball into the far left corner of the goal for the only goal of the match. It was a difficult ending for Bendick, who had made eight saves and played a strong game in goal for the Tigers all night.

The South Carolina goal came just a minute after Clemson failed to score on its best opportunity of the night. Clemson’s Eric Cava passed to Bryson Moore from near point-blank range and he attempted a header that bounced off the ground, hit the crossbar, then bounded away to the left of the goal. South Carolina had had a similar opportunity with five minutes left, but Danny Poe headed out a South Carolina shot that hit the cross bar and was then cleared by a teammate.

The match was a sharp contrast to last year’s contest, a 4-3 Clemson victory in Columbia to open the season. That was the highest scoring match decided by one goal in the series in 20 years. Friday, the two teams battled to a scoreless tie through the two 45-minute halves of regulation. At halftime both teams had nine shots and five corner kicks. Clemson had 18 shots to 13 for South Carolina through regulation. Clemson then had four shots in the first overtime and did not allow a South Carolina attempt.

Clemson senior Mark Buchholz played all 110 minutes for the Tigers in midfield. He will also serve as Clemson’s starting place kicker for the Florida State football game on Monday night at Death Valley.

“We had our chances to win, but a draw would have been a fair result,” said Clemson Head Coach Trevor Adair, who is now 10-3-1 against South Carolina. “Our effort was there. But, I was disappointed in our composure in front of the goal offensively. David Newton played well for us on defense, but we had to take him out due to cramps. That disrupted the flow of the game from our standpoint.

“South Carolina was more physical today. We knew going in it would be a very physical match.”