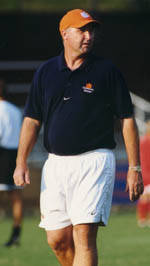 Clemson, SC – The sixth-ranked Clemson men’s soccer team will travel to Fullerton, California this weekend to take part in the Cal State-Fullerton Invitational Tournament. The Tigers will face Cal State Fullerton on Friday night at 7:00 PM and the University of California on Sunday afternoon at 4:30 PM. This weekend’s action will mark the first two regular season games of the year for the Tigers. In two exhibition games this season, Clemson defeated the College of Charleston 7-1 and the U.S. Under-17 National Team 1-0.

This season, the Tigers return eight starters from a team that earned a number-two seed and advanced to the quarterfinals of last year’s NCAA Tournament. The 2000 team also finished the season ranked in the top-10 of every major poll. Juniors Doug Warren and Fabio Tambosi along with sophomore Oguchi Onyewu each earned First-Team All-ACC honors last season.

Tournament Notes: Series with Cal State Fullerton–Clemson is 1-0 all-time versus Cal State Fullerton with the only meeting between the schools coming last season. In 2000, 11th-ranked Clemson defeated the 20th-ranked Titans 5-1 in the championship game of the Clemson Nike Invitational on October 1. In that match, First-Team All-ACC performer and current Tiger Fabio Tambosi scored two goals and had two assists for the Tigers.

Series with California–Clemson is 0-1-1 all-time against California with the last meeting between the two schools coming in 1996.

California–California Finished the 2000 season with a 6-13-1 record and a fourth place finish in the Pac-10. The Bears are coached by Kevin Grimes and 2001 will be his second season at the school.

Clemson–Clemson finished the 2000 season with a 14-4-2 record overall, and a 3-3 mark in the ACC. As the number-two seed, the Tigers advanced to the quarterfinals of the NCAA Tournament where they lost to the eventual national champion Connecticut in overtime. Clemson finished last season ranked in the top of every major poll. In 2001, Clemson returns eight starters and 16 lettermen.

Clemson’s leaders in 2000–In 2000, Mark Lisi led the team in scoring with 15 goals and eight assists for 38 points. Current Tiger Fabio Tambosi had 14 goals and five assists for 33 points. Pablo Webster had 13 assists and two goals for 17 points.