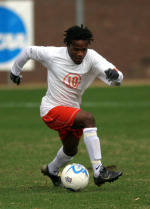 Dane Richards started in the match for New York Red Bull as he made his MLS debut.